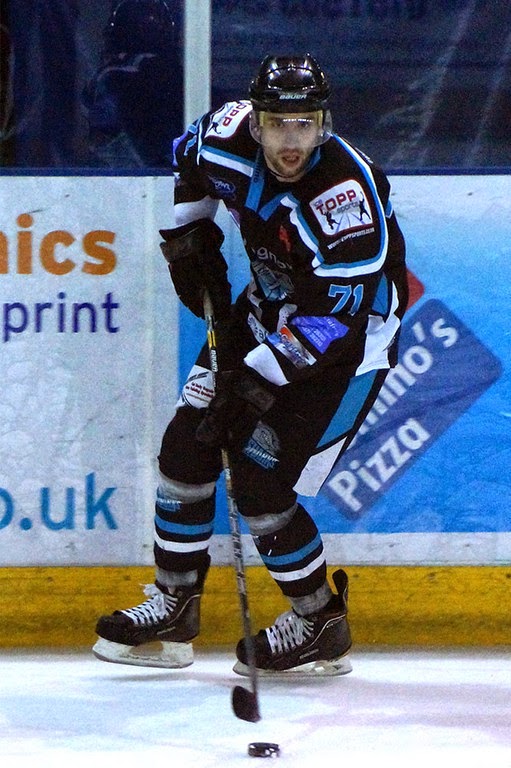 Blackburn Hawks retained their unbeaten NIHL North Moralee D1 record with a 3-2 win at Billingham Stars. The Teessiders stayed in the hunt for a play-off spot with a 4-2 success at Sheffield Spartans.

Philip Mulcahy (4) & Dale White (3) topped the scoring for Blaze as they won 14-0 at home to Bradford Bulldogs. Hull Jets enjoyed a four-point weekend, winning 6-2 at Bradford and 10-3 on home ice against Blackburn Eagles.

Chelmsford Chieftains moved to the top of NIHL1 South after a pair of wins. Two Darren Brown goals helped them to a 2-1 success at MK Thunder and they followed up with a 6-1 home victory against Invicta. The Dynamos stayed in the title mix with a 9-5 win at home to Oxford City Stars.

Wightlink won 5-2 at home to Cardiff NIHL1, but Raiders found things tougher on the road as they drew 3-3 at Bracknell Hornets. London Raiders won 5-3 on home ice against Streatham Redskins, while Tom Davis’ leveller secured a 2-2 draw at Oxford. Solent Devils drew 3-3 with Streatham.

Telford Tigers extended their lead at the top of the EPL to 13 points after picking up a pair of victories. Tigers won 4-0 at Guildford Flames and followed up with an 8-5 home success against Bracknell Bees. Guildford bounced back to win 6-5 after a shoot-out at Manchester Phoenix – Vladimir Kutny scored the decider.

Frantisek Bakrlik scored three for Phoenix in their 8-3 victory at Bracknell Bees. Peterborough Phantoms won 5-3 at home to Bracknell and 5-1 at Swindon Wildcats. MK Lightning fell 5-4 at Basingstoke Bison and 6-3 at home to Swindon. Lubomir Korhon grabbed the overtime decider for Sheffield Steeldogs as they won 6-5 against Basingstoke.

Nottingham Panthers blew the Elite League title race wide open with victories against two of their rivals. Panthers raced to a 4-0 win at Belfast Giants and they completed an impressive weekend with a 6-3 home success against Braehead Clan.

Belfast won 5-2 at home to Fife, but Flyers gained their revenge in the reverse fixture with a 5-4 shoot-out victory. Sheffield Steelers bounced back to form with a pair of wins. Jeff Legue’s late goal sealed a 2-1 home success against Coventry Blaze and they made it a four-point weekend with a 6-0 victory at Cardiff Devils.

Jakub Sindel hit the winner for Coventry in their 2-1 win at home to Dundee Stars, while Brent Walton’s overtime strike secured a 3-2 success for Cardiff at Hull Stingrays. Edinburgh Capitals fell 7-3 at Braehead, but they recovered back on home ice to defeat Hull 4-3.

Coventry are through to the semi-final of the Elite Challenge Cup after completing a 5-4 aggregate win against Braehead.