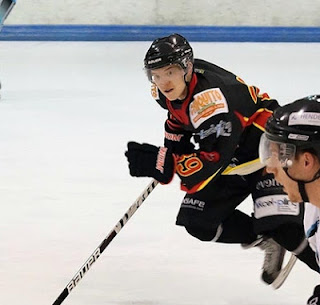 Solway Sharks are three points clear at the top of NIHL1 North after a narrow 3-2 win at home to Telford Titans. Blackburn Hawks move up to third after beating Whitley Warriors 8-0 – Ivo Dimitrijevs scored five – and they followed up with a 10-5 win at Sutton Sting – Aaron Davies (2), Chris Arnone (2) & Matt Viney (2) were amongst the goals. Sheffield Spartans eased their relegation worries with a 9-2 win at home to Coventry Blaze – Will Barron bagged a hat-trick.

NIHL2 North leaders Nottingham Lions lost their unbeaten record with a 5-3 defeat at Hull Stingrays – James Maughan (2) and Chris Hogarth (2) led the scoring. Sheffield Senators are up to second after beating Blackburn Eagles 7-0, while Solihull Barons came from behind to win 8-5 at Fylde Flyers – Joe Henry (3) & Jake Larkin (2) were amongst the goalscorers.

Billingham Stars reached the final of the Trans-Pennine East/West Trophy after beating Sutton 6-1 – James Moss scored two – and Whitley 5-2. Their likely opponents in the final are Solway after they maintained their unbeaten group record with a 9-2 win at Deeside Dragons – Stevie Moore hit a hat-trick for the Sharks.

Wightlink Raiders stay top of NIHL1 South after a four-point weekend. Raiders beat Invicta Dynamos 5-3 on home ice and followed up with a 4-0 road success at MK Thunder – Nathan Taylor scored two. Romford Raiders maintained their 100% league record with a 15-5 win at home to Cardiff Devils – Juraj Huska bagged a hat-trick – and a 3-2 win at Chelmsford Chieftains.

Basingstoke Bison have opened up a four point lead at the top of the EPL. Greg Chambers hit a hat-trick in their 5-2 win at home to Bracknell Bees, while Greg Owen grabbed two in a 4-3 win at Manchester Phoenix. The defeat completed a miserable weekend for Phoenix who also fell 4-2 at Swindon Wildcats. Slough Jets completed a weekend double over Peterborough Phantoms, winning 3-1 on home ice and 3-2 in the reverse fixture.

Guildford Flames beat Telford 3-1 and the Tigers slipped to a second defeat the following night, losing by the same score at home to Sheffield Steeldogs. Two goals from Kamil Tverdek helped MK Lightning to a 4-2 win at home to the Steeldogs, but MK’s inconsistent form continued as they crashed 4-2 at Bracknell.

Elite League leaders Belfast Giants returned to winning ways with a 5-2 success at Dundee Stars, before crushing Edinburgh Capitals 9-1 at the Odyssey Arena. Sheffield Steelers won 5-4 after overtime at home to Dundee – Shawn Limpright got the winner – and followed up with a 7-2 victory at Braehead Clan – Tom Sestito scored three – and 3-2 at Edinburgh.