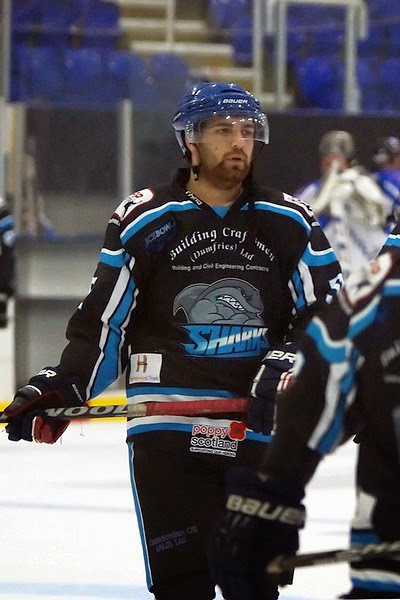 Reigning NIHL North champions Solway Sharks bounced back to form with an impressive performance at Sutton Sting. Struan Tonnar (2) led Sharks’ scoring as they ran out 5-1 winners in their Moralee D1 clash.

Nottingham Lions won 4-2 at Hull Jets, but failed to follow up on home ice as they lost by the same scoreline to Deeside. Filip Supa scored four for Widnes Wild as they triumphed 7-3 at Coventry, while a late Lee Pollitt goal secured a 5-5 draw at home to Hull.

Chelmsford Chieftains moved to the top of NIHL1 South with a 7-4 win at Streatham Redskins. Anthony Leone & Callum Fowler both hit hat-tricks in Invicta Dynamos’ 7-3 win at home to Cardiff NIHL1. Bracknell Hornets won 6-3 on home ice against Oxford City Stars, but fell 3-2 in the reverse fixture. Alex Murray grabbed the decider as Solent Devils won 5-4 at London Raiders.

Peterborough Islanders made it three NIHL2S wins in a row with a 5-1 home victory against Lee Valley Lions. Wightlink Tigers won 7-2 at Swindon Wildcats NIHL and Haringey Racers won 7-3 at home to Invicta Mustangs. In the D2 Cup, Slough Jets won 3-2 against Haringey and 6-1 at Basingstoke Buffalo.

Shaun Thompson (3) led the scoring for Manchester Phoenix as they cruised to an 8-0 win at Blackburn Hawks in the British Challenge Cup. Billingham Stars were also shut-out as they lost 7-0 at Sheffield Steeldogs. Swindon Wildcats won 3-0 at Wightlink Raiders and 9-1 at home to Invicta Dynamos. Wightlink also lost 3-2 at Chelmsford.

Telford Tigers moved six points clear at the top of the EPL after collecting a pair of wins. Nathan Salem hit a hat-trick in their 8-2 road win against the Steeldogs and they followed up with a 3-2 home victory against Bracknell Bees.

Guildford Flames started the week in impressive fashion with an 11-0 demolition of the Steeldogs. Two final period goals from Adam Carr condemned Flames to a 3-2 defeat at MK Lightning, but they recovered in style with a 6-3 home win against Basingstoke Bison.

Lightning lost 5-4 after overtime at Swindon, but Milan Kostourek’s late goal secured a 6-5 win at Peterborough Phantoms. Edgars Bebris (2) & Luke Ferrara (2) got the goals as Phantoms won 4-3 at Manchester. Basingstoke won 4-2 at home to Bracknell.

Belfast Giants are the new Elite League leaders. Giants followed up a 7-2 win at Coventry Blaze with a 4-1 home victory against Braehead Clan, but they missed the opportunity to move two points clear of Clan after falling 5-1 at Coventry. Clan’s miserable week in the league was completed as they lost 6-2 at Hull Stingrays.

Sheffield Steelers had a mixed weekend, winning 10-2 at Edinburgh Capitals before slipping to a surprise 4-2 reverse at Dundee Stars. Nottingham Panthers won 3-1 on home ice against Coventry and 2-1 at Cardiff Devils. Fife Flyers made it four wins from their last five games with home successes against Hull and Edinburgh.

In the Elite Challenge Cup, Braehead won 3-0 at home to Dundee – Ben Davies, Matt Keith & Scott Pitt got the goals.