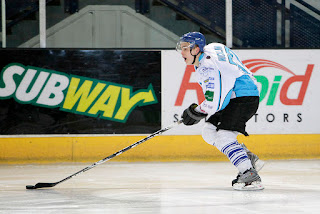 Sutton Sting boosted their NIHL1 North play-off hopes with a comfortable 4-1 win over Blackburn Hawks – Chris Sykes was amongst the goals. Coventry Blaze had a mixed weekend – losing 6-2 at Telford Titans, before bouncing back with a 7-2 win at home to Trafford Metros – Josh Nicklin (left) hit a hat-trick. A late DJ Good goal helped Whitley Warriors grab a 5-5 draw at Sheffield Spartans.

EPL leaders Basingstoke Bison had a miserable festive period, falling 3-2 at home to Sheffield Steeldogs and 4-3 after a shoot-out at MK Lightning. Manchester Phoenix picked up four points with a 10-2 win over Telford Tigers – Michal Psurny hit a hat-trick – and a 6-3 home victory against Bracknell Bees. However, Phoenix missed the chance to draw level on points with Bison as they fell 8-4 at Sheffield.

Two goals each for Ben Campbell and David Longstaff helped Guildford Flames to a 7-5 win at Swindon Wildcats and they followed up with a 4-1 victory at Telford. Kamil Tvrdek scored three in MK Lightning’s 6-2 win over Bracknell, while Aaron Nell bagged a hat-trick in Swindon’s 7-3 win at home to Peterborough Phantoms. Bracknell’s Shaun Thompson scored twice as the Bees downed Telford 7-2 and Luke Ferrara’s pair helped Peterborough to a 7-4 win at home to MK Lightning.