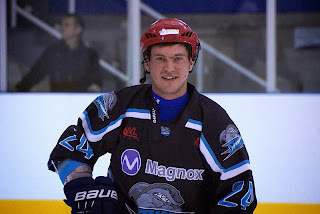 Deeside maintained their lead at the top of NIHL2 (Laidler Conference) with an impressive 4-2 win at Nottingham Lions – Simon Furnival (2), Jordan Bannon & Gavin Austin were Dragons’ scorers. Philip Pollok scored twice for Coventry Blaze in their 7-2 win at home to Widnes Wild. Ed Eaton’s late winner sealed a 3-2 victory for Solihull Barons at Sheffield Senators. Blackburn Eagles came close to securing their first points of the season with a spirited display at home to Hull Jets. Eagles led 3-2 with 10 minutes remaining, but Hull snatched the win with two late goals.

EPL leaders Manchester Phoenix secured a four-point weekend winning 5-3 at Sheffield Steeldogs and 4-3 at home to MK Lightning. Guildford are up to second after a trio of wins. Flames won 3-2 at home to Peterborough Phantoms, before cruising to a 7-0 victory at Bracknell Bees. They ended the week with a 4-2 home success over Sheffield.

Basingstoke Bison enjoyed a pair of 5-2 wins over Peterborough and Telford Tigers. Leigh Jamieson scored twice as MK Lightning came from three down to beat Slough 5-3, but Jets picked up four points on the week with 2-1 & 7-1 wins against Swindon Wildcats. Jaroslav Cesky scored twice in Peterborough’s 6-0 home win over Bracknell Bees, while Telford fell 5-2 at Swindon.

Belfast Giants still lead the Elite League after splitting their weekend series with Cardiff Devils. Jake Morrisette sealed a 2-1 shoot-out win for Cardiff in the first game, but Giants bounced back the following day with a 2-1 success of their own. Leigh Salter’s strike helped Nottingham to a 4-3 overtime win against Dundee Stars, while Brandon Benedict hit a hat-trick for Panthers in their 7-1 victory over Fife Flyers.

Sheffield Steelers beat Coventry Blaze 5-2 and followed up with a 3-0 win at Fife, but they failed to secure a six-point week after falling 4-2 at home to Braehead Clan. Two goals each for Ashley Tait and Ryan Ginand helped Coventry Blaze to a 5-2 win over Hull Stingrays. Edinburgh Capitals lost 3-1 at Braehead and 6-4 at home to Dundee, while in the Challenge Cup Cardiff beat Hull 6-5 after a shoot-out.