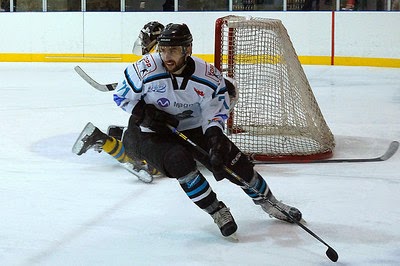 The reigning Moralee Conference champions defeated Sutton Sting 4-2 in Dumfries and followed up with a 3-2 road success to seal a 7-4 aggregate success – Pavol Melichercik (left) & Iain Bowie both scored three over the two legs.

Widnes Wild clinched their place in the Laidler Conference play-offs with a 7-4 win at Hull Jets. Wild now face Solihull Barons in the end of season showdown, with Coventry Blaze meeting Nottingham Lions in the other semi-final.

Basingstoke Bison won their second trophy of the season after claiming the EPL play-off title in Coventry. Bison eased into the final with a 5-2 success against Guildford Flames, while Frantisek Bakrlik’s overtime strike sealed a 4-3 win for Manchester Phoenix against Swindon Wildcats.

Robin Kovar put Phoenix ahead in the final, but two quick goals by Ciaran Long and Joe Rand sent Bison 2-1 ahead by the second break. Phoenix drew level through James Archer early in the third, before Joe Baird and Tomas Karpov made it 4-2 to Bison. With just over three minutes left Kovar gave Phoenix renewed hope, but Aaron Connolly’s late empty netter sealed the win for Bison.

Sheffield Steelers secured the Elite League play-off title after a thrilling weekend in Nottingham. Steelers progressed to the final after a 3-2 victory against Braehead Clan, while the Giants grabbed a 1-0 semi-final success against Fife Flyers.

An end-to-end final saw Giants twice take the lead only for the Steelers to tie things up. Both teams had chances to win in regulation time, but they couldn’t be split and the game went to 4-on-4 sudden death overtime. Just over a minute into the extra period Drew Fata sent the huge Steelers following into raptures as he ripped a rocket past Stephen Murphy to give his side victory.