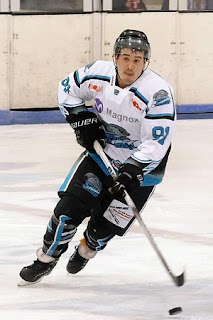 Solway Sharks extended their lead at the top of NIHL1 North to three points after a 6-2 win at Whitley Warriors – Nathan Salem (left) scored five. Billingham Stars slumped to a 6-3 loss at Sutton – Chris Sykes scored twice for Sting – and the former Elite League forward followed up with another pair as Sting beat Trafford Metros 4-3.

Ed Eaton hit a hat-trick in Telford’s 7-2 win over Coventry Blaze, but Titans’ poor away form continued as they fell 5-3 at Blackburn Hawks. Sheffield Spartans boosted their survival hopes with a 6-4 win at Trafford – Ollie Barron (2) & Shaun Wild (2) led Spartans’ scoring. Solway clinched their place in the final of the Trans-Pennine East/West Trophy with a 7-3 home win over Blackburn – Adam Reynolds scored four.

Deeside Dragons are second in NIHL2 North after a 6-4 win over promotion rivals Solihull Barons. Blackburn Eagles stay bottom after a 5-0 loss at home to Hull Stingrays.

Romford Raiders still lead NIHL1 South after a 5-3 win at home to Invicta Dynamos – Juraj Huska hit a hat-trick. Chelmsford Chieftains are up to second after a pair of wins – 5-1 at Bracknell Hornets and 7-1 at home to Streatham Redskins. Invicta kept their top four hopes alive with an 8-5 home win over Cardiff, but the Devils bounced back in style to down title chasing Wightlink Raiders 4-2. In the NIHL South Cup Romford beat Oxford Stars 6-1, while Wightlink eased past MK Thunder 3-0.

Guildford Flames are the new leaders of the EPL after a trio of wins. Two goals from David Longstaff helped Flames to a 3-1 win at home to Swindon Wildcats, while Curtis Huppe hit a pair in a 3-0 success over Peterborough Phantoms. Flames completed a successful week with a 6-4 win at Bracknell Bees. Two goals from Aaron Nell helped Swindon to a 5-3 win over Basingstoke, but Bison bounced back with a 5-1 win at home to Telford Tigers. Bison failed to follow up as they fell 4-3 at Sheffield Steeldogs – Greg Wood hit the shoot-out winner.

Manchester Phoenix split their weekend double-header with MK Lightning. Phoenix lost 3-2 at Milton Keynes but won the return fixture 5-2. Slough Jets won 6-4 at home to Bracknell and followed up with a 4-3 shoot-out victory at Peterborough – Darius Pliskauskas got the winner. Sheffield fell 5-3 at home to Swindon and the Wildcats made it three wins for the week with an 8-4 success at Telford – Jonas Hoog hit a hat-trick. Two goals each for Luke Ferrara & Lewis Hook helped Peterborough to a 7-6 win at Telford.

Nottingham Panthers are four points clear at the top of the Elite League after a pair of wins over Coventry Blaze. Bruce Graham hit the only goal of the game as Panthers won 1-0 on home ice and they completed a four-point week with a 4-1 road win. Belfast Giants won 3-2 at Braehead Clan, but slumped to a 4-1 defeat at home to Sheffield Steelers.

Anaheim’s Matt Beleskey scored twice in his final game for Coventry as they beat Sheffield 5-3. Cardiff Devils slipped to a shock 3-2 defeat at home to Hull Stingrays, but recovered to win 6-3 at Edinburgh Capitals – Mac Faulkner scored three. Derek Keller bagged the overtime winner for Fife Flyers in their 3-2 win at Edinburgh and he repeated the feat as Flyers won 4-3 at Braehead. Clan gained revenge with a 3-1 victory in Fife. Hull remain bottom after losing 3-1 to Sheffield, while Edinburgh lost 2-0 at Dundee Stars.