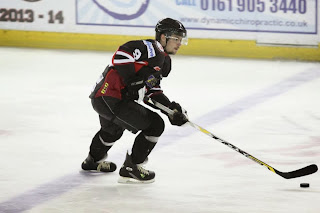 Billingham are the new leaders of NIHL1 North (Moralee Conference) after a 6-3 win at home to Solway Sharks – Stephen Wallace (2) and Paul Windridge (2) led Stars’ scoring.

Whitley are second after a three-point weekend. Warriors threw away a two goal lead at Manchester to draw 5-5 – Minotaurs’ Lukas Zeman (left) scored four – but they bounced back in style with a 13-1 win at home to Telford Titans.

Deeside Dragons lost their 100% NIHL2 (Laidler Conference) record with a 5-0 reverse at Coventry – Josh Gent scored a couple for Blaze. Craig Wallis scored twice in Nottingham Lions’ 3-2 win at Solihull Blaze. Widnes Wild picked up their first ever NIHL points with a 4-1 win at Sheffield, while the Senators picked up their first win of the season with a 6-3 success over Blackburn Eagles.

Manchester Phoenix enjoyed another four-point weekend in the EPL, winning 3-1 at MK Lightning and 12-2 at home to Slough Jets. Guildford Flames won 3-2 at Basingstoke, but Doug Sheppard’s shoot-out winner saw Bison secure a 5-4 success in the reverse fixture. Swindon beat Sheffield Steeldogs 3-2, but Wildcats failed to follow up with a 4-3 defeat against Lightning.

Two goals each for Scott McKenzie and Nathan Salem helped Telford to a 6-2 win at Peterborough, and the Tigers made it a perfect weekend with a 5-1 home success over the Phantoms. Bracknell Bees lost 8-4 at Slough but regained some pride with a 3-0 win at home to Sheffield.

Elite League leaders Dundee Stars picked up maximum points from their weekend double-header against Hull Stingrays, winning 2-1 on the road and 3-2 in the return game. Belfast Giants won 4-1 at Cardiff Devils, while Nottingham Panthers enjoyed a 4-2 victory over Braehead Clan. Two Ben Davies goals helped Cardiff to a 3-1 win at Edinburgh Capitals.

In the Challenge Cup Coventry Blaze suffered a miserable weekend, losing 3-2 at Sheffield Steelers after overtime and 6-1 at home to the Panthers. Fife Flyers retained their unbeaten Cup record with a 5-0 success over Edinburgh.