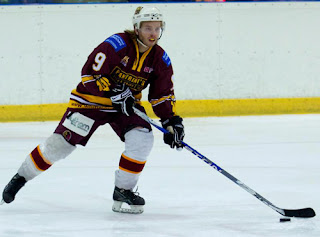 Billingham Stars’ forward Stephen Wallace scored twice in their 4-3 win at Manchester Minotaurs and he followed up with another pair in a 3-2 success at home to Sheffield Spartans.

Coventry Blaze are up to third in Laidler Conference after a 6-4 win at Nottingham Lions. Sheffield Senators won 3-0 at Blackburn Eagles – Nathan Britton scored twice.

NIHL1 South leaders Chelmsford Chieftains lost their unbeaten league record with a 5-3 reverse at home to London Raiders. Jakub Klima scored twice in Raiders’ 4-1 win at MK Thunder. Invicta Dynamos beat Wightlink 7-3, but the Raiders stayed in touch at the top with a 6-4 victory against Bracknell Hornets. Four goals by Callum Best helped Streatham Redskins to an 11-1 win at home to MK Thunder. In the South East Trophy Chelmsford cruised to a 13-3 win against Invicta.

Manchester Phoenix moved to the top of the EPL with a pair of wins. Two Michal Psurny goals helped them to a 4-2 victory at Swindon Wildcats and they followed up with a 4-1 success at home to MK Lightning. Guildford Flames had a disappointing weekend, losing 6-3 at Slough Jets and 4-3 after overtime at home to Basingstoke Bison. Slough also won 5-3 at Peterborough Phantoms, while Bison beat Telford Tigers 5-1.

Shaun Thompson’s overtime winner sealed an 8-7 victory for Bracknell at home to Sheffield Steeldogs, and the Bees made it a four-point weekend with a 6-5 success at Telford. Swindon won 2-1 at Sheffield, while Adam Carr grabbed the winner as MK Lightning beat Peterborough 5-4 after a shoot-out.

Elite League leaders Belfast Giants had a mixed week, losing 8-3 at Nottingham Panthers before bouncing back with a 6-3 victory at home to Edinburgh Capitals. Panthers picked up another two points with a 5-4 overtime win at Braehead, while Clan sealed a win of their own as they defeated Cardiff Devils 8-4.

Tim Hartung’s overtime strike helped Fife to a 4-3 win at home to Hull Stingrays, and the Flyers followed up with a 7-4 victory at Coventry Blaze – Bobby Chaumont hit a hat-trick. Jake Morrisette grabbed the shoot-out winner as Cardiff beat Dundee Stars 5-4. Jereme Tendler scored twice in Hull’s 5-4 win at Edinburgh.