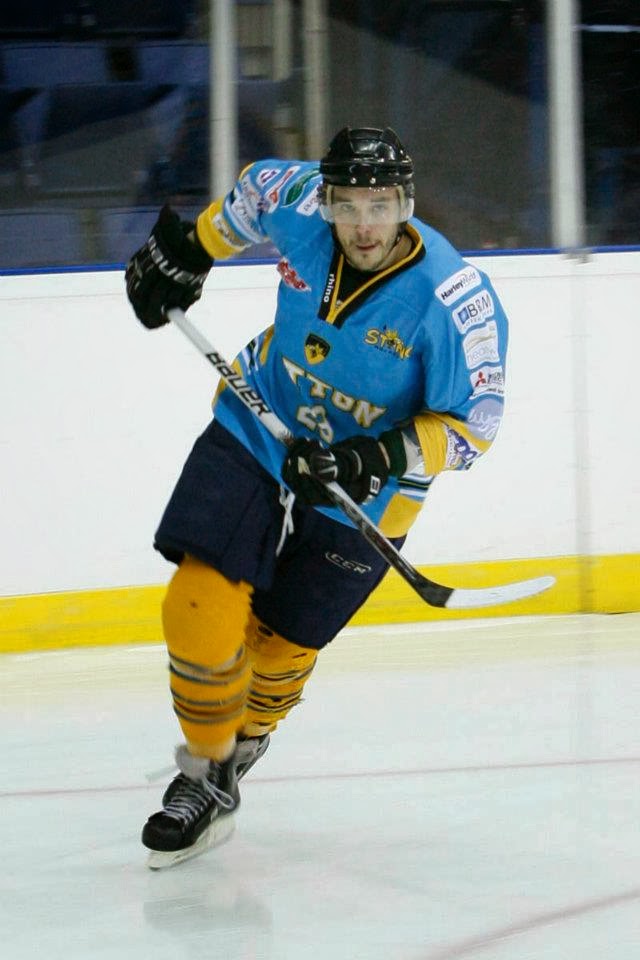 A late Simon Offord (left) goal capped a 3-1 win at Sheffield Spartans and Sting followed up with a 6-1 road victory at Whitley Warriors – Ivo Celar (2) led their scoring.

Blackburn Hawks edged nearer their first ever league title with an 8-4 win at home to Solway Sharks. Billingham Stars stay second after a 3-1 home success against Spartans.

Widnes Wild drew 2-2 at Blackburn Eagles and followed up with a 5-3 home victory against Hull Jets.

Chelmsford Chieftains took a big step towards retaining their NIHL1 South crown after collecting  a pair of road wins. Chieftains triumphed 4-2 at Bracknell Hornets and 9-0 at Invicta Dynamos.

Streatham Redskins had a mixed weekend, winning 3-2 at Wightlink Raiders before slipping to a 4-2 home defeat against London Raiders.

MK Thunder kept their top four hopes alive with an 8-5 win at home to Oxford City Stars. Cardiff NIHL1 remain bottom of the table after losing 6-2 on home ice against Invicta and 6-3 at Solent Devils.

NIHL2S leaders Slough Jets retained their 100% record with two road victories. Jets won 3-2 at Chelmsford Warriors and 4-2 at Haringey Racers. Warriors bounced back with a 7-1 home win against Lee Valley Lions. Haringey picked up two points with a 4-0 success at Peterborough Islanders.

Telford Tigers continued their march to the EPL title after securing two victories against MK Lightning. Dan Davies scored the decider in their 2-1 road win, while Jason Silverthorn weighed in with a couple of goals as Tigers cruised to a 6-2 success back on home ice.

Guildford Flames also picked up four points, winning 5-4 at home to Peterborough Phantoms and 4-2 at Bracknell Bees. Donatas Kumeliauskas (2) led the way for Phantoms as they won 6-2 at home to Sheffield Steeldogs.

Swindon Wildcats won 10-1 at home to Bracknell, but failed to follow up as they crashed 5-2 at Manchester Phoenix. Basingstoke Bison eased to a 6-1 home success against the Steeldogs.

In the British Challenge Cup semi-final first leg, Telford came from 3-0 down at Guildford to clinch a 4-3 victory – Nathan Salem grabbed a couple of goals.

Sheffield Steelers won 4-2 at home to Nottingham Panthers, but they found Cardiff a tougher proposition as they fell to a 4-0 road defeat.

Rene Jarolin hit a hat-trick for Edinburgh Capitals in their 5-2 victory at home to Fife Flyers and the Slovakian completed a successful personal weekend with the decider in a 2-1 overtime win against Coventry Blaze.