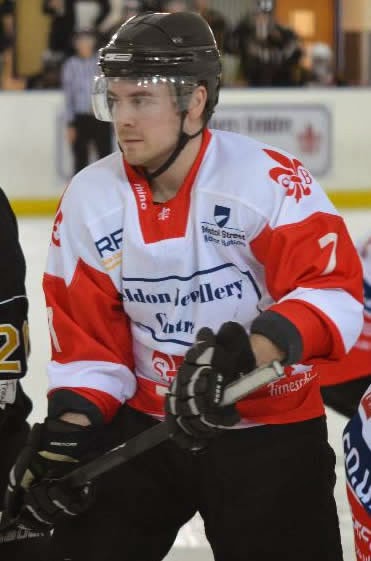 Solway Sharks secured their place in the NIHL North Moralee D1 play-offs after a four-point weekend.

Sharks won 5-3 at home to Whitley Warriors and followed up with a 13-5 victory at Manchester Minotaurs.

Billingham Stars are also through to the end-of-season showdown after winning 6-2 at home to Whitley. Sheffield Spartans won 5-3 at Manchester and Blackburn Hawks triumphed 3-0 at Sutton Sting.

Joe Henry (left) hit a hat-trick as Solihull Barons moved to within a point of the Laidler D2 title with a 7-5 win at home to Deeside Dragons.

Widnes Wild remain on course to clinch the promotion play-off place after collecting a pair of home wins.

Filip Supa scored twice in their 6-2 victory against Coventry Blaze and he repeated the feat in Wild’s 10-0 success against Bradford Bulldogs. Arron Jordan’s last minute strike sealed a 6-5 win for Blackburn Eagles at Bradford. Sheffield Senators won 8-1 at Hull Jets.

Chelmsford Chieftains edged closer to retaining their NIHL1 South crown with two road victories. Chieftains won 11-3 at Oxford City Stars and followed up with a 4-3 success at MK Thunder.

Invicta Dynamos had a mixed weekend, losing 6-3 at Wightlink Raiders before bouncing back with a 6-2 home win against London Raiders. Wightlink picked up another two points with a 4-3 success at Solent Devils. Streatham Redskins won 6-0 at home to Oxford – Jakub Klima scored four.

Slough Jets retained their 100% NIHL2S record with a 6-3 home win against Lee Valley Lions. Chelmsford Warriors lost 6-4 at Peterborough Islanders, but recovered in style with a 12-2 success at Lee Valley. Invicta Mustangs picked up their first points of the season after a 4-0 win at home to Haringey Racers.

EPL champions Telford Tigers extended their winning run to 12 games with a pair of home victories. Max Birbraer hit a hat-trick in their 6-4 success against Peterborough Phantoms and Tigers followed up with a 5-3 win against Sheffield Steeldogs.

Guildford Flames remain on course to secure second place after a 6-3 win at home to Swindon Wildcats. Basingstoke Bison lost 5-3 on home ice against Swindon, but bounced back to win by the same scoreline at Bracknell Bees.

Blaz Emersic grabbed the decider for MK Lightning as they beat Bracknell 5-4 after a shoot-out. Donatas Kumeliauskas hit the shoot-out winner for Peterborough in their 3-2 victory at home to Manchester Phoenix.

Cardiff Devils won 12-0 at home to Dundee Stars. Coventry Blaze enjoyed a 5-0 home success against Edinburgh Capitals. Hull Stingrays lost 4-3 at Nottingham, before battling to a 3-1 success at Fife Flyers. They ended the week with a 6-3 reverse at Dundee.

Cardiff clinched the Elite Challenge Cup with a 2-1 win against the Steelers – Andrew Lord & Chris Culligan got the goals.