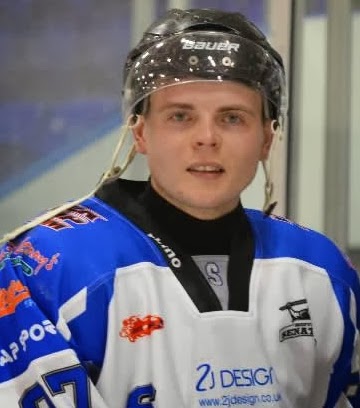 Adam Brittle scored four in Blackburn Hawks’ 7-2 victory against Whitley Warriors, Stephen Wallace bagged a brace as Billingham Stars won 3-2 at Sutton Sting, while Spartans edged back into play-off contention after a 7-4 win against Manchester Minotaurs.

Josh Bruce (4) led the scoring for Laidler Conference leaders Solihull Barons as they cruised to a 13-3 win at home to Coventry Blaze. Deeside’s Chris Jones hit a hat-trick in Dragons’ 8-3 victory against Hull Jets. Luke Branin scored the only goal as Nottingham won 1-0 at Hull, but the Lions failed to follow up as they crashed 4-1 at Sheffield Senators – Sergevs Jegorovs (above) scored three. Geoff Wigglesworth also hit a hat-trick in Widnes Wild’s 8-5 win against Blackburn Eagles.

Chelmsford Chieftains strengthened their grip on NIHL1 South after a four-point weekend. Gary Clarke (2) & Luke Brittle (2) led the scoring in their 6-3 win at Bracknell Hornets, while Michael Ranby grabbed the winner in a 4-3 success at home to Wightlink Raiders. The Isle of Wight outfit picked up two points with a 7-6 win against London Raiders.

Andy Smith (2) & Callum Fowler (2) were amongst the scorers as Invicta Dynamos beat Cardiff 9-1, but the Devils regained some pride with a 3-2 success at home to Solent & Gosport Devils. Streatham Redskins won 5-3 at MK Thunder and 6-3 in the reverse fixture. In the SE Trophy Invicta won 5-2 at London.

Oxford City Stars are the new leaders of NIHL2 South after a pair of victories. Stars won 6-2 at Swindon Wildcats and 10-1 at home to Lee Valley Lions. Chelmsford Warriors triumphed 6-2 at Invicta Mustangs.

Joe Greener’s strike sealed a 3-2 home win for Basingstoke against Swindon Wildcats, but Bison missed the chance to go top after a 4-2 reverse at Bracknell Bees. Guildford remain third after a 3-1 win at Peterborough. Telford Tigers continued their march up the table after a pair of wins against MK Lightning. Nathan Salem scored a couple in a 6-2 road success, while Dan Davies hit the decider in a 5-4 shoot-out win on home ice. Slough Jets lost 4-0 at home to Bracknell and 3-2 at Swindon.

Basingstoke are through to the final of the EPL after completing an 11-9 aggregate win over Guildford. Manchester recovered from three behind to draw 5-5 at MK Lightning in their semi-final first leg.

Elite League leaders Belfast Giants enjoyed another four-point weekend. They beat Hull Stingrays 3-0 and followed up with a 6-4 win against Fife Flyers. Giants are also through to the final of the Challenge Cup after completing a 10-4 aggregate victory over Cardiff Devils.

Neil Trimm’s late empty net goal capped a 3-1 for Braehead against Coventry Blaze, while Joe Cullen hit the shoot-out winner as Clan won 4-3 at Edinburgh Capitals. Sheffield Steelers lost 5-2 at Nottingham Panthers, but bounced back in style with a 5-1 win at home to Coventry – Stefan Meyer scored four. Panthers lost 4-3 after a shoot-out at Hull.

Jordan Fulton (2) & Derek Roehl (2) led the scoring as Fife won 7-3 at Hull, and Flyers sealed a four-point week with a 3-1 success at home to Dundee Stars. Cardiff also beat Dundee by the same scoreline.