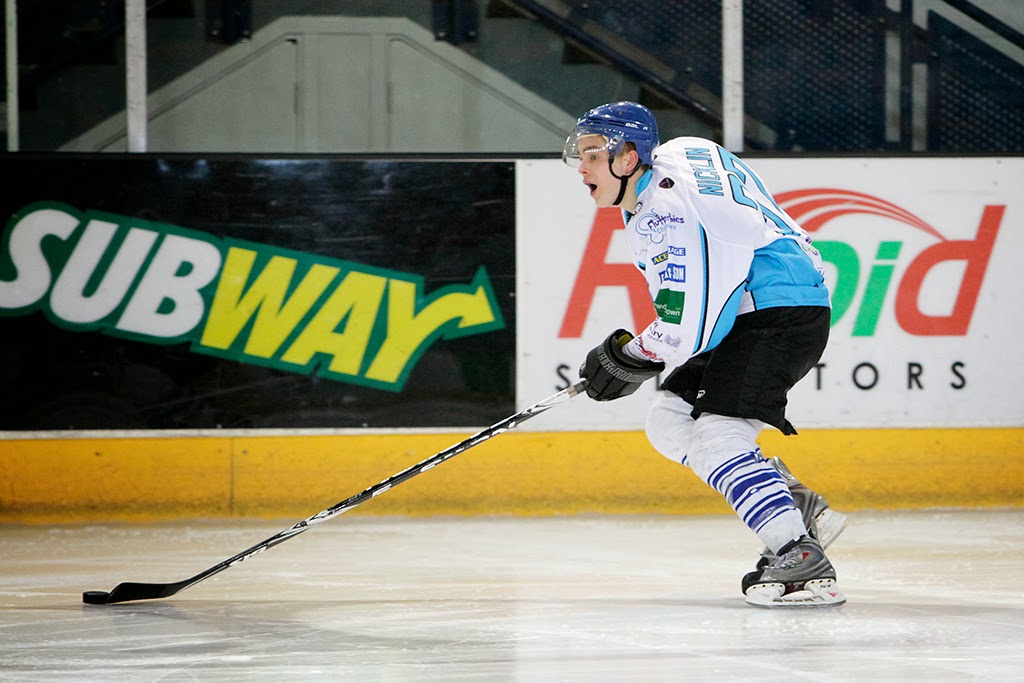 Sutton Sting’s hopes of reaching the NIHL North (Moralee Conference) play-offs suffered a major blow as they fell 5-0 at home to Blackburn Hawks.

Karl Culley scored twice in Whitley Warriors’ 3-3 draw at Manchester Minotaurs. Solway Sharks won 11-2 at home to Telford Titans and followed up with an 8-2 success at Billingham Stars in the KD Flavell & Sons Northern Cup.

Solihull Barons moved a step closer to the Laidler Conference title after a 13-0 win against Hull Jets. Deeside Dragons picked up three points from their weekend double-header against Blackburn Eagles, drawing 3-3 on the road before a comprehensive 10-0 success on home ice. Coventry Blaze forward Josh Nicklin (above) scored three as they beat Sheffield Senators 8-4.

Manchester Phoenix moved back to the top of EPL after a four-point week. They lost 6-4 at Peterborough Phantoms, but bounced back with two 5-4 wins against Guildford Flames & Telford Tigers. Henri Sandvik hit a hat-trick in Swindon Wildcats’ 5-2 success at Basingstoke Bison, while Aaron Nell scored a couple in their 3-0 victory at MK Lightning.

Adam Walker grabbed the shoot-out decider as Telford won 4-3 at Bracknell Bees. Slough Jets lost 6-1 at home to Lightning and 4-3 at Guildford. Basingstoke won 4-1 at Lightning in the first leg of the EPL Cup Final.

Colin Shields’ late strike sealed a 5-4 comeback win for Belfast Giants against Cardiff Devils. Giants failed to follow up, losing by the same scoreline after a shoot-out at Sheffield Steelers. Rob Dowd scored twice in Steelers 4-0 win at Dundee Stars. Nottingham Panthers started the week with a 1-0 win at home to Cardiff, before crashing 8-2 at Braehead Clan. They bounced back to beat Fife Flyers 5-2.