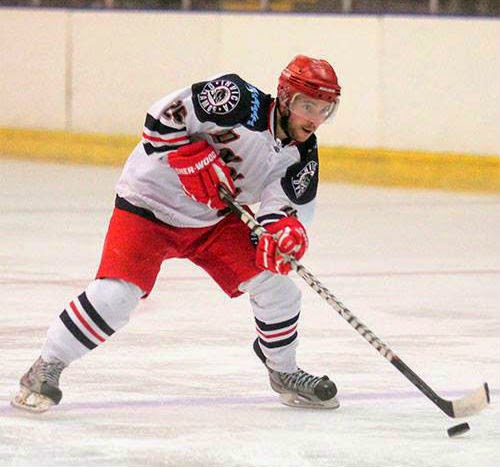 NIHL1 South outfit Invicta Dynamos pulled off the first shock in this season’s British Challenge Cup with victory over the EPL’s Bracknell Bees.

Streatham Redskins won by the odd goal in eleven at Wightlink, while MK Thunder eased to a 5-2 victory at home to Solent. London Raiders had a miserable weekend, losing 5-0 at Cardiff NIHL and 8-1 at Bracknell Hornets.

Slough Jets retained their 100% NIHL2S record with a 5-0 win at home to Peterborough Islanders. Invicta Mustangs fell 5-3 at Lee Valley Lions and Peterborough ran out 3-1 winners at home to Chelmsford Warriors. In the D2 Cup, Swindon Wildcats NIHL won 5-3 at Bristol Pitbulls.

Solway Sharks’ recent return to form continued as they enjoyed success on two fronts. Richard Bentham scored a couple in their 4-1 win at home to Sheffield Spartans in NIHL1N and they followed up with a 1-0 victory at Whitley Warriors to secure silverware with a 5-1 aggregate success in the St Andrews Cup.

James Spurr (2) & Nat Rose (2) led the way for Sutton Sting as they condemned Billingham Stars to an 8-1 defeat, but the Teessiders bounced back with a 2-0 success in the reverse fixture. Alex Lawson scored twice in Whitley Warriors’ 5-1 win at Manchester Minotaurs.

Solihull Barons still lead the way in NIHL2N after a comfortable 10-2 victory at Coventry Blaze – Thomas Soar hit a hat-trick. Deeside Dragons slipped to a 4-2 defeat at Widnes Wild, but recovered to win 3-1 at home to Nottingham Lions. Blackburn Eagles raced into an early 3-0 lead at home to Hull Jets, but the visitors roared back to claim a 5-3 victory.

EPL leaders Telford Tigers crashed 4-0 at Swindon Wildcats, but bounced back in style on home ice with an 8-2 win against Sheffield Steeldogs. Basingstoke Bison won 3-2 at home to MK Lightning, but failed to follow up as they crashed 8-3 at Manchester Phoenix.

Aaron Nell hit the winner for Swindon as they triumphed 3-2 after a shoot-out at MK Lightning, while Darius Pliskauskas notched the game winning goal for Peterborough Phantoms in their 3-2 shoot-out success at Sheffield. Guildford won 5-3 at home Peterborough and Bracknell Bees secured a 3-1 victory at home to Manchester.

Braehead Clan moved back to the top of the Elite League after a pair of wins against Coventry Blaze. Stefan Meyer scored twice in their 4-2 home success, while Scott Pitt hit the decider in a 4-3 road win. Belfast Giants won 7-4 at home to Cardiff, but the Devils gained their revenge in the return with a narrow 3-2 victory.

Nottingham Panthers enjoyed a 7-2 home win against Sheffield Steelers, but they couldn’t make it a four-point weekend as they surprisingly fell 5-3 at Edinburgh Capitals. Steelers bounced back with a 6-1 win at home to Fife Flyers. John Mitchell scored three in Dundee Stars’ 6-4 win at Hull, but the Stingrays recovered with a 4-3 success in the reverse fixture. Fife won 4-1 at home to Edinburgh.