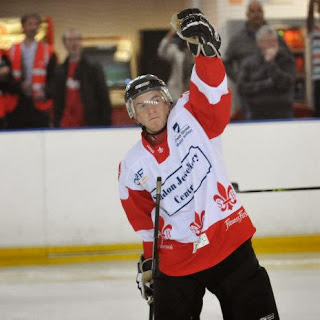 The battle of the top two in NIHL North (Laidler Conference) saw Solihull close to within a point of Deeside Dragons with a 6-3 win – Barons’ Richard Slater (left) scored twice. Luke Branin hit a hat-trick in Nottingham Lions’ 5-1 win against Blackburn Eagles.

Coventry Blaze suffered a double blow to their title hopes with a 5-2 loss at Sheffield Senators and a 5-4 defeat at home to Hull Jets. Senators picked up another two points with a 3-1 win at Widnes Wild.

Sutton Sting moved into the top four in Moralee Conference with a 4-3 win at home to Whitley Warriors – Ryan Johnson (2), Chris Sykes & Vjaceslavs Movko got the goals. Blackburn Hawks beat Billingham Stars 7-1, while Telford Titans are still waiting for their first points of the season after a 13-4 loss at home to Manchester Minotaurs.

Wightlink Raiders moved to the top of NIHL1 South following a 4-4 draw at Streatham Redskins and a 3-1 win at MK Thunder. Jakub Klima scored four in London Raiders’ 12-6 win at home to Cardiff Devils. Invicta Dynamos won 13-3 at MK Thunder – Juraj Huska hit a hat-trick. Oxford City Stars closed the gap on the two in NIHL2 South with an 8-1 win at Invicta Mustangs.

Guildford are the new leaders of the EPL after a four-point weekend. Two Paul Dixon goals helped Flames to a 4-2 win at MK Lightning and they followed up with a 5-4 success at Peterborough Phantoms – Branislav Kvetan bagged the overtime winner.

Joe Miller hit a hat-trick in Basingstoke’s 4-3 win at Swindon Wildcats, but Bison missed the chance to go second in the league with a 4-2 reverse at Slough Jets. Sheffield Steeldogs beat Bracknell Bees 4-2 and they picked up another point in a 7-6 overtime loss at home to MK Lightning. Jaroslav Kruzik scored twice in Telford Tigers’ 5-2 win against Peterborough.

Belfast Giants extended their lead at the top of the Elite League with a pair of wins. Calvin Elfring’s overtime strike helped secure a 3-2 victory against Fife Flyers and they followed up with a 5-2 win at home to Sheffield Steelers – Colin Shields (2) & Robby Sandrock (2) led the scoring. Jerry Pollastrone hit the winner as Dundee Stars beat Hull Stingrays 3-2 after overtime.

Andrew Lord scored twice in Cardiff Devils’ 4-2 win at home to Nottingham. The Panthers bounced back with an 8-0 demolition of Braehead Clan. Sheffield beat Edinburgh Capitals 4-1, but fell by the same scoreline at Coventry Blaze. Danny Stewart’s 100th Elite League goal sealed a 7-6 overtime win for Fife against Braehead. Jereme Tendler scored three in Hull’s 7-1 home win over Edinburgh, but the Capitals picked up two points with a 3-2 victory against Dundee.

Great Britain U20s retained their World Championship Division 1 Group B status after an excellent competition in Dumfries. GB began with losses to Italy and Kazakhstan, before a thrilling overtime win against France. Following defeat to Ukraine they faced Japan in a relegation showdown and came from behind to seal a 4-2 win. Italy topped the group to secure promotion to Group A.