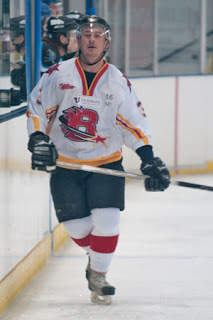 Whitley Warriors boss Simon Leach has had a busy week, adding nine players to his roster. Karl Culley (left) and Ross Hanlon have joined from Billingham Stars, while Richie Lawson, DJ Good and Callum Watson have all agreed another year. The list is completed by returnees Tommy Ralph, Josh Maddock, Christian Johnson and Jordan Barnes.

Ex-Warrior Shaun Kippin is believed to be interesting a couple of NIHL North clubs. Kippin spent last year with Deeside after the Dragons beat off competition from Blackburn Hawks to secure his signature. However, C2C understands the Hawks have not approached Kippin this summer.

NIHL2 North newboys Widnes Wild have snapped up Ben Simister from the Dragons, while Nottingham Lions have agreed another year with Michael Rose and Ben Wood.

In NIHL1 South Chelmsford Chieftains have signed ex-Romford Raiders captain Julian Smith. Defenseman Mike McKay has confirmed his departure from Chelmsford, with a return to Scotland on the cards, though forward Grant Bartlett has agreed a further season. Shaun Yardley and Jason Buckman have signed for London Raiders, Corey Watkins has confirmed another year with Wightlink Raiders and Daniel Fudger has been added to Invicta Dynamos’ roster.