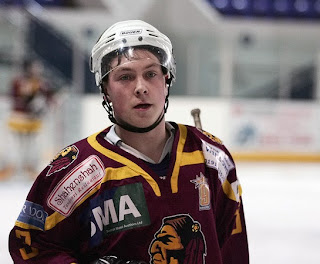 Whitley Warriors have snapped up defenseman Dan Harris from MK Lightning ahead of the forthcoming NIHL North season. Harris (left) returns to Hillheads after making over 80 appearances in the EPL for Lightning and Basingstoke Bison during the past two years.

Solway Sharks have announced the signing of Slovakian defender Juraj Senko. He returns to Dumfries after spells in the EPL and Elite League with Telford Tigers and Edinburgh Capitals.

Sutton Sting have added another four to their roster with Ben Sayer, Shannon Lingwood, Rupert Sharpe and Ben Hollingworth all agreeing another year with the club. Lee Pollitt has signed for a second season with Trafford Metros.

As first rumoured by C2C, netminder Josh Nicholls and forward Connor Hubbuck have moved from Coventry Blaze to Solihull Barons. The pair will be joined at Hobs Moat Road by returnees Joe Henry, Erik Bakalar, Mike Rodger, Phil Lee and Sam Hewitt, with Richard Crowe making the step up from the U18s. Two of last year’s Barons squad look set for a move across the Midlands, with Chris Allen and Neil Adams believed to be on their way to Nottingham Lions.

Deeside have confirmed James Parsons and Andrew Chappell to their roster, while it’s understood the Dragons are close to securing a new import. Widnes Wild have added Troy Evans, Chris Preston and Steve Gilmartin to their squad, while Joel Aheran, Jordon Martin and Josh Wheway have stepped up from Sheffield’s U18s to join the Senators.

In NIHL1 South Alex Green and Tom Castle have agreed another year with Chelmsford Chieftains. Frankie Harvey returns for his fifth season with London Raiders, while Peterborough Phantoms pair Nathan Pollard and Dan Lane have signed two-way deals with the club. Invicta Dynamos have confirmed defenseman Harrison Lillis has agreed a third season with the Kent outfit.