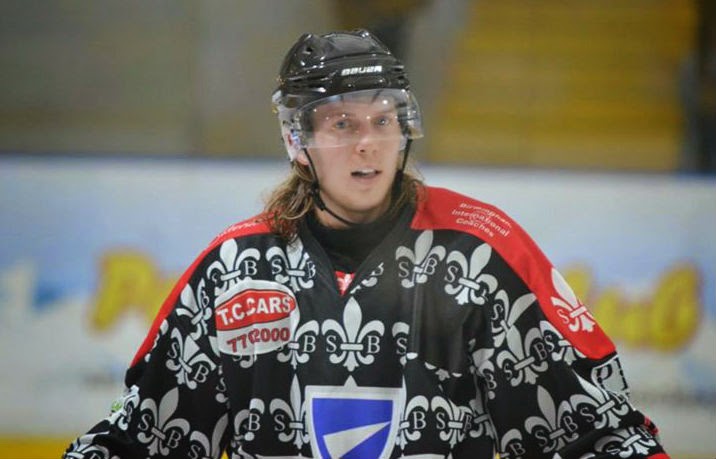 Solihull Barons hopes of winning NIHL North Laidler D2 this season received a major boost last weekend, with the confirmation of the signing of Niklas Ottosson.

The Swedish forward’s addition to the Barons roster was announced a few hours before their demolition of Widnes Wild. Ottosson enjoyed an impressive debut, grabbing three assists in Barons’ 10-1 romp.

Ottosson is a product of the HC Vita Hästen junior system, going on to make his senior Division 1 debut in 2009/10. He played over 100 games before switching to Lindlövens IF in 2012. Ottosson enjoyed an excellent season, scoring 22 goals with 28 assists in 40 games.

He returned to HC Vita Hästen in 2013/14 and helped the team gain promotion to the Allsvenskan – the second tier of the sport in Sweden.

Ottosson explained how he arrived in NIHL North: “I’ve thought about playing abroad for a couple of years and last season got into a relationship with a girl from England. After some discussions about where we wanted to live, and because I didn’t find a good solution with my old team, we ended up here.

“I wanted to try something new and I thought it was a good time to do it now. I had a try-out with Telford Tigers earlier this summer, but they didn’t have an import slot left for me. My girlfriend lives in Solihull, so that’s how I ended up with the Barons. I’ve only played one game and had a couple of practices with Solihull so far.

“I played in Vita Hästen last season in the Swedish Division 1, which is the third best league in Sweden. We got promoted to the second league last season, which was absolutely great to be a part of and I hope the best for them this coming season.”

Ottosson admitted he was disappointed not to sign in the EPL, but was full of praise for the welcome he received at Solihull: “I do think they are a good team and should be in a higher level. The boys and staff are great and they took good care of me when I came – I really appreciate that.”