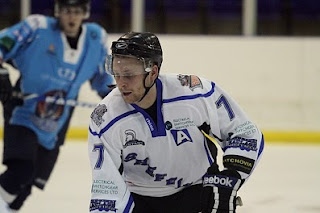 Sheffield Spartans’ preparations for the new NIHL North season have been dealt a severe blow, with captain Ollie Barron announcing he has quit the club.

Since his senior debut in 2005 Barron (left) made almost 150 appearances for Spartans, finishing as top points scorer for the last two seasons. Barron featured in last weekend’s pre-season win over Sheffield Senators, but a dispute between the player and Sheffield Academy resulted in his departure.

The 25-year-old commented: “I’ve left the Spartans due to off-ice issues stopping the team from progressing. I’m a free agent and open to offers from other teams. I don’t really want to get into an online slanging match, but I will say I have left due to Sheffield Academy politics. The people who are in the wrong will know what that is.”

Spartans Team Manager Lynn Millard released a brief statement saying: “At the moment I have no comment about Ollie. We are still communicating with him and want to ensure everything is sorted appropriately for all.” C2C understands a number of clubs are interested in signing Barron.

Elliot Perrin has been surprisingly released by Nottingham Lions. Perrin enjoyed a breakout year in 2012/13 as Lions stormed to the NIHL2 North title and he was expected to be a key component in their defensive unit this term.

C2C asked Perrin about his departure: “I was released last Friday via text message from Danny Harrison (Lions GM). I’ve been with the club since I was eight and am disappointed how this has been done.” A Lions spokesman declined to comment. It’s thought that Spartans and Senators are interested in Perrin, while Sutton Sting are another possible destination. Lions have confirmed Cameron Good and Daniel Hazeldine have agreed another year with the club.

Deeside Dragons forward Ric Hughes has returned to Blackburn Hawks. Hughes notched 61 goals in 89 games for the Hawks from 2009-2012, before being appointed Dragons’ Assistant Coach last season. It’s also understood Hawks may be interested in adding Adam Brittle to their roster, with a return to the EPL’s MK Lightning looking unlikely.