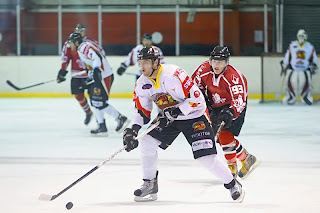 The rebranded National Ice Hockey League’s teams are slowly putting together their rosters for next year, with Deeside Dragons (formerly Flintshire Freeze) and Solihull Barons leading the way.

Dragons’ new coach Steve Fellows moved swiftly to appoint Rick Hughes (left) as his assistant, with the Deeside outfit looking to build a promotion winning team. Hughes finished last season as top scorer at Blackburn Hawks in NIHL1 North and will be expected to rack up big numbers in Division 2.

Former Peterborough Phantoms coach Chris Allen has stepped down from the EPL to join relegated Solihull and the Barons will hope he can spark a quick return. Top forward Richard Slater boosted the Barons by agreeing to return for another season.

The loss of Hughes by Blackburn is a huge blow to their hopes of building on their third placed finish last term and they look set for a difficult summer. Import Sami Narkia is thought unlikely to return, while Jordan Bannon has been linked with a move to the EPL with Telford Tigers. Brian Worrall announced he won’t be back next year, with Lance Derbyshire another whose future is in doubt. Long serving Aaron Davies and Sam Dunford are also rumoured to be on the radar of a number of clubs.

Whitley Warriors welcome back Garry Dowd for a second season as coach. Defender Rob Wilson has retired while Dean Holland is believed to be wanted by a number of EPL teams. Newly promoted Solway Sharks are yet to announce any signings, though Frazer Goldie has left to join Edinburgh Capitals in the Elite League.

Telford Titans’ netminder Ben Hunt has moved to the EPL with the Tigers and forward Chris Jones is understood to be considering a move back to Deeside. Hunt will be joined at Telford by former Nottingham Lions defender Marcus Maynard.

In NIHL1 South Wightlink Raiders have been the busiest so far adding a number of former EPL players. Netminder Matt Colclough and forward Craig Tribe have joined from Basingstoke Bison  though import Joe Rand has moved the other way. Nick Compton (Swindon Wildcats) and Robbie Brown (Peterborough) are other notable additions.

Chelmsford Chieftains’ coach Gary Clarke has agreed another season but has lost import Jakub Klima to Streatham Redskins. Invicta Dynamos have signed EPL forward Brad Watchorn from Bracknell Bees and Finn Peter Vaisanen returns after a spell with Lamarit in his home country.