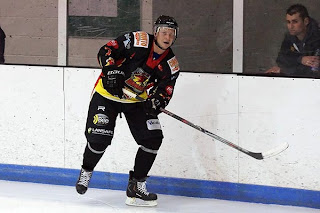 Craig Rogers has agreed another season with Blackburn Hawks. In two separate spells with the club Rogers has racked up over 150 NIHL games and is seen as a key figure in Hawks’ defensive unit.

Player/Coach Jared Owen was delighted with the latest addition to his roster: “Craig is an underrated player. He keeps everything simple, moves the puck well, can carry it when needed and is strong in the crease and corners, using his size to his advantage.

“He skates very well for his size and is mobile enough not to get beaten one-on-one very often. He forged an excellent on-ice chemistry with Rick Ravey last season, helping Rick’s transition to defence. I’ll be counting on Craig to maintain his consistent high level of performances as we compete in what will be an excellent league this year.”

There are a number of pre-season games over the weekend, with the highlight being Sutton Sting’s clash with Chelmsford Chieftains. The reigning NIHL1 South champions travel to IceSheffield on Saturday, with the return on home ice the following evening.

Solway Sharks host Whitley Warriors on Saturday, before travelling to Hillheads on Sunday. The remaining fixtures see Deeside Dragons face-off against Manchester Minotaurs, while Solihull Barons meet Telford Titans for the Steve Perks Memorial Trophy. As revealed by C2C earlier in the summer, defenseman Tomas Janak is set to move from Telford Tigers to the Barons.