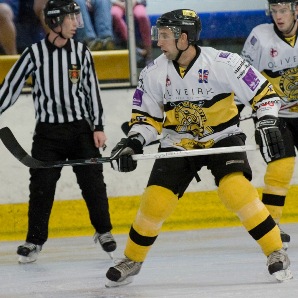 Billingham Stars have pulled off a major coup with the signing of Michael Bowman (left) from Bracknell Bees. Bowman returns to his native North East after enjoying a successful career in the BNL and EPL with the likes of Newcastle Vipers and particularly Slough Jets, helping the Berkshire club to two play-off titles and a cup success. Bowman becomes the first signing of new Coach Simon Leach, who also confirmed Adam Robinson, James McCabe, Scott Ward and Andy Thornton had all agreed another season with the reigning NIHL1 North champions.
Whitley Warriors’ Coach Garry Dowd has added another three to his roster with Callum Watson, Josh Maddock and Martin Crammond all returning for another year at Hillheads. Watson topped the Warriors’ league points standings last term with 49 points from 31 games and Dowd was delighted to secure the forward for another campaign, “Signing Callum was a no-brainer,” said Dowd. “He’s got great speed, especially in the opposition’s defensive zone, which makes him a difficult player to stop. We’ll be looking for more of the same from him in the coming year.” Dowd said he was still in talks with a number of last season’s squad along with some new faces – Billingham’s Simon Hehir is thought to be amongst those being considered by the Warriors.
Blackburn Hawks have endured a difficult summer so far, losing a number of players to rivals Deeside Dragons, but have finally announced a new addition to their roster in the shape of Jordan Ashington. The 21-year old joins the Hawks from Division Two’s Bradford Bulldogs and Coach Jared Owen is confident his new forward will prove a hit with the Hawks: “He’s a very strong skater, with a heavy shot and will offer us a big strong forward who goes hard to the net, creating opportunities for himself and his team-mates. We feel he’ll more than compensate for one of the gaps we have from the players who’ve moved on and will be a player the Hawks’ fans will appreciate in no time at all.”
Sheffield Spartans Coach Chris Wilcox has confirmed Ollie and Will Barron have agreed another year with the Yorkshire outfit. The prolific pair led Spartans’ scoring charts last year with Ollie racking up 45 points with 39 for Will and Wilcox will be hoping for a similar return this time around. Newly promoted Sutton Sting have been quiet so far, but Coast to Coast understands they are interested in signing ex-Nottingham Lions netminder Alan Levers and former Blackburn defender Scott Glover.
(Image permission: Chris Callaghan)