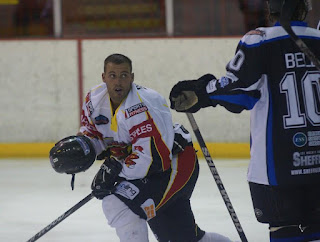 Davies (left)  admitted it was a difficult decision saying, “I’d like to says thanks for my time at Blackburn but I think it’s now come to an end. I want to thank you so much for the chance and skills you’ve given me over the seasons and I hope that we get to work together again in the future.”

Davies becomes the third high profile departure from the club in under a week, following on from Ric Hughes’ move to Deeside Dragons and the resignation of team boss Graham Lomax. Though yet to be officially announced by the club, Coast to Coast can reveal player/coach Jared Owen and his assistant Danny Brittle have agreed to return for 2012/13.

Despite the recent upheaval Owen remains confident saying, “We had a meeting with the Rink last week and have both agreed to return for next season. The rink are 100% behind our plans for moving the team forward and we have their full support. We’ve known about Ric leaving since before the end of the season and he leaves with our full support. It’s a big opportunity for him to move into coaching, it’s his home town team and he wants to help them get out of Division 2. He’ll be a big loss for the team but we’ve been in contact and still are in contact with a number of players we believe will improve the team and results we achieved this year.”

With regards to the Lomax leaving the club, Owen admitted the rink were yet to confirm the news to him, but admitted he’d be difficult to replace if it was the case.

Lomax’s departure had cast some doubt over the future of his son and Hawks’ defender, Ollie, but he released a brief statement confirming his commitment to the club, “I made my debut for the Hawks in the EPL cup aged 15, way before my dad was involved with the team and I intend to still be playing way after he has been involved. The only way I would leave Blackburn was (like last time) if I wasn’t wanted.”

Back-up netminder Stuey Ashton is also believed to want to return next season along with Sam Dunford, though the latter is interesting other NIHL teams.