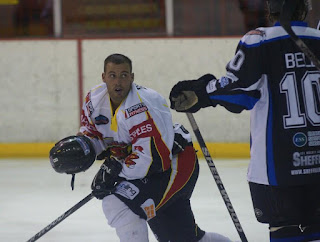 Aaron Davies could be on his way back to Blackburn Hawks. The popular forward left for Deeside Dragons in the summer, but Hawks’ Coach Jared Owen says the club are hoping to add Davies (left) to their roster once again, “We’ve had a chat and Aaron’s said he wants to come back,” said Owen. “Hopefully he’ll be motivated and he’s a proven scorer in this league which is just what we need right now.”

Jordan Bannon has confirmed he’s leaving the Hawks for the EPL’s Telford Tigers. After successfully coming through the first round of trials for the GB U20 team, Bannon was advised his chances would be enhanced if he found a regular slot with an EPL team. Owen admitted he was disappointed to lose a player of Bannon’s quality, but stressed he left with the best wishes of everyone at the club.