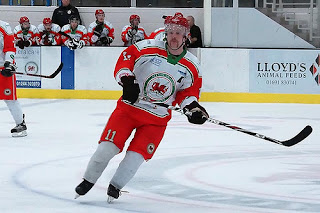 “It’s important for us to keep hold of certain players from last season and Shaun is definitely one of those,” said Foster. “He’s great to have around the dressing room and is hugely influential to us on the ice. With 42 points from 23 games last year, we’ll be looking for more of the same from him this time around.”

C2C understands another Dragons forward is set to leave the club, with Ric Hughes believed to be on the verge of returning to Blackburn Hawks.

Solway Sharks have confirmed Alan Crane and Struan Tonnar have agreed another year with the club. Crane’s performances for Sharks saw him handed a two-way deal with the Elite League’s Braehead Clan last season, while Tonnar’s campaign was disrupted by injury.

Both players were pleased to join Sharks’ roster once again. “I’m looking forward to returning and will be looking to compete for honours as we’ve done in the past few years,” said Crane. “We managed to win the league last year, but were disappointed with how our season ended, so this will give me and the team a new target.”

Struan added “I’m really looking forward to getting back on the ice and contributing to our success. It was extremely frustrating for me last season having to watch and not being able to help the boys but I hope that is all behind me now. Martin (Grubb) has been busy and I know I’ll be given time to get back into the swing of things and look forward to challenging for every trophy available to us.”

Sheffield Spartans have confirmed the signings of James Maughan and Michael Alexander. Maughan joins from Hull Stingrays while Alexander returns to the UK after a successful season in Canada’s GMHL with Bradford Rattlers. The pair are joined by returnees Nick Whyatt, Dan Taylor and Danny Mawer.

Sheffield Senators have signed Arran Bell from the Spartans, while Martyn Gray, Olly Knell, Simon Manning, Jamie Pyewell and Jonny Bell all return for another year. As first rumoured by C2C, Nottingham Lions have signed Neil Adams from Solihull Barons. Widnes Wild have added Joe Charlton and Daniel Bracegirdle to their roster.