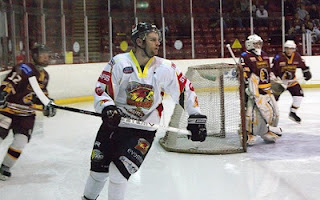 Deeside Dragons have confirmed the signings of Tom King (left) and Brian Worrall from Blackburn Hawks. The pair join former team-mates Ric Hughes and Aaron Davies in North Wales, as the Dragons continue to put together an impressive looking roster.

King returns to Deeside after coming through the junior ranks and onto senior level with Flintshire Freeze and is delighted to make the switch from Blackburn. He said: “I’m looking forward to the start of the season and being part of this new team at Deeside. A good team is being put together and I’m sure we’ll do well.”

Another Dragons target, Chris Jones, is thought to favour staying with Telford Titans, though it’s understood Blackburn would be interested in adding him to their depleted roster.

Former Whitley Warriors boss Simon Leach has agreed to join NIHL1 North champions Billingham Stars. Leach replaces Stephen Foster, who stepped down as Coach earlier this week, and admitted he’s excited to be given the opportunity.

“After meeting with the Stars’ management I was impressed with what they had to say and they made me feel that Billingham would be a great place to come and coach,” said Leach. “I’m looking forward to the challenges that lie ahead and will be doing my very best to carry on the excellent work done by Stephen and Terry Ward last season.” It’s also thought influential defenders Dave Thomas and Andy Finn will ice again next season, though the club are yet to make any official announcement.

Solway Sharks have announced Nathan Salem and Struan Tonnar have agreed another season in Dumfries. Head Coach Martin Grubb suggested both players were vital to Sharks’ hopes of challenging for the title saying, “I really wanted them to return as they’re both quality players. Nathan showed last year he’s a real danger to opposition teams and his strength, shot and eye for goal will make him a real threat to any team.

“Struan’s been exceptional for us in the last few seasons and his versatility has seen him play both forward and defence when needed. He’s a key part of our powerplay and I’ll be looking to use him in a more offensive role this year and get him back to producing as a forward most nights.”

Sheffield Spartans’ Andrew Turner and David Pyatt have agreed another season with the club. Relegated Nottingham Lions have strengthened their squad with the signing of defenseman Luke Thomas from rivals Solihull Barons, while Gareth O’Flaherty has returned for a fourth season.