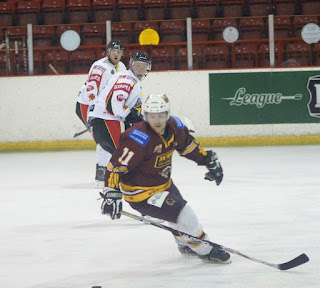 The NIHL swings back into action this weekend with some eye-catching Division Two games. Shaun Kippin will make his debut for promotion-chasing Deeside on Saturday, as the new-look Dragons travel to meet Blackburn Eagles. The Welsh outfit return home on Sunday to face Hull Stingrays. Nottingham Lions face an opening day trip to the coast to face a Fylde Flyers team still hopeful of sorting out a return for Latvian import Elvis Veldze. Flyers also remain in the market for another netminder.

Trafford Metros host Coventry Blaze in Division One’s first game on Sunday. Blaze travel to Altrincham on the back of a second pre-season loss – 3-2 to NIHL1 South team MK Thunder. Blackburn Hawks will hope to bounce back from their 10-1 challenge game defeat to the EPL’s Telford Tigers, with a win at home to Sheffield Spartans. Hawks have confirmed Sam Dunford & Lance Derbyshire to their roster.

Billingham Stars are expecting a sell-out crowd on Saturday for the visit of the EPL’s Sheffield Steeldogs. Stars’ new-boys Stephen Wallace & Michael Bowman will ice for the first time, as the NIHL1 North double-winners test their title credentials. The following evening Stars make the short journey north to face local rivals Whitley. Warriors Coach Garry Dowd has confirmed Phillip Pritchard & Harry Harley have returned for another season, while netminder Liam McAllister is back at Hillheads after spells with Newcastle Vipers & Wightlink Raiders.