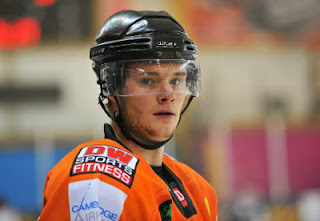 Deeside Dragons have completed the signing of ex-Blackburn Hawks forward Jordan Bannon. Having been without a club since leaving the EPL’s Telford Tigers, Bannon was widely expected to return to Blackburn after Hawks Coach Jared Owen described his possible return as the “final piece to the jigsaw.” However, Dragons have stepped in to persuade Bannon to join their NIHL2 North promotion bid.

Dragons boss Ian Foster is delighted to snap up the talented youngster from under the noses of their rivals, “I’m really happy to have Jordan on board as he had other teams after him but chose to come to Deeside,” said Foster. “The top teams in Division Two have all strengthened, so it’s really important for us to do the same. Pete Founds is also due back early in the New Year, which will be like another new signing after being out for so long.”

Bannon finished last season as Hawks’ second top scorer with 17 goals & 21 assists and only recently just missed out on a place with the GB U20 squad. He goes straight into the Dragons team this Sunday against Fylde Flyers.