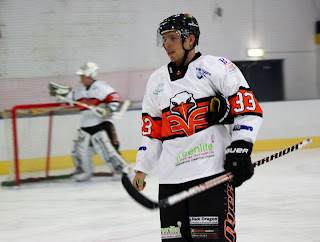 Solihull ran out comfortable 7-3 winners over Blaze in their challenge match which raised over £2000 for the Help for Heroes charity. Barons also confirmed veteran defenseman Phil Lee has agreed another season at Hobs Moat Road.

Trafford Metros have had a busy few days adding another six players to their roster. James & Jason Pirie, Sean Day, Ben Brown & Marc Etherington will be joined by Kevin Cassidy, who returns to Altrincham after a year away from the game. Metros defenseman Scott Robson has left the club to join Hull Stingrays. Robson has signed a two-way deal with the Elite League side which will also see him ice for Stingrays’ NIHL2 team.

Invicta Dynamos have secured the signing of forward Nat Rose from Sutton Sting, while captain Andy Smith has returned for a ninth season. Wightlink Raiders’ import Jimmy Chiropoulos won’t be moving to the Isle of Wight after discrepancies in his game stats were discovered. Coach Jeremy Cornish has secured the services of Jiri Hanzal from Edinburgh Capitals as his replacement.