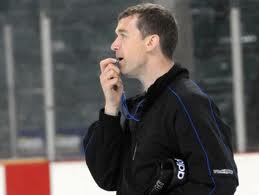 Billingham Stars’ Stephen Foster (left) has announced he’s to step down as Coach of the NIHL1 North champions. Foster is believed to be unable to commit to the role on a full-time basis. Coast to Coast understands ex-Whitley Warriors boss Simon Leach could be tempted into taking over.

Current Warriors Coach Garry Dowd has secured three more players for the new season, with Dean Holland, Christian Johnson and Nathan Ryder all agreeing another year with the club. Dowd was delighted with the additions, particularly Holland who’d been linked with moves elsewhere, “Dean came to Hillheads part way through last season and contributed more than a goal a game, which is a very good average for the National League,” said Dowd. “He brings Elite League pedigree to the Warriors squad from his time at Newcastle and Dundee and will be a very vital part of our effort to bring silverware back to Whitley over the coming months.”

Blackburn Hawks have added a trio of their own, with defenders Chad Briggs, Ollie Lomax and Craig Rogers all signing on the dotted line. Briggs and Lomax had been rumoured to be interesting Deeside Dragons but have agreed another year, while Rogers returns after an impressive 2011/12 campaign. Rumours the Hawks were interested in making a move for Telford Titans forward Karol Jets were denied by Coach Jared Owen, but he admitted the club were actively seeking to bolster their roster saying, “We’re talking to a number of new players from different teams who we believe will improve on our team from last season, negotiations are ongoing so I don’t want to say anything until we have them signed.”

Sheffield Spartans have confirmed Nick Manning’s return for the new season. Manning is the club’s all-time top points scorer with 82 goals & 134 assists and Spartans will hope he can continue to produce the goods once again.

Deeside Dragons continue to build an impressive looking roster for their Division Two campaign and have added two more with the signings of Simon Furnival and Pete Founds. Furnival enjoyed an excellent season last year scoring 26 goals with 18 assists, while ex-Flintshire Freeze star Founds returns to Deeside after two seasons away from the game. Founds averaged over two points a game while with Freeze and Dragons believe he’ll add vital experience to their promotion bid.