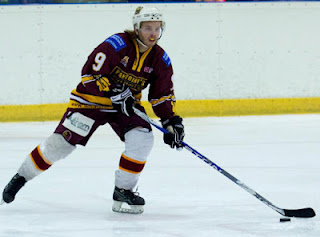 Whitley Warriors have confirmed three more signings as they continue to build for the 2012/13 NIHL1 North season. DJ Good (left) and Callum Pattison have returned for another year with the club, while Simon Hehir has moved from rivals Billingham Stars.

Coach Garry Dowd was pleased with the additions saying, “DJ’s a fans’ favourite and has exceptional stick-handling skills which make it very difficult for the opposition to take the puck away from him. He was one of our top points scorers in the last campaign and will be an integral part of our plans for the coming season. I wanted Simon twelve months ago and I’m delighted he’s finally agreed to come to Hillheads. Callum’s a very difficult player to stop when he gets going and defenders do back off him, but we’ll have to make sure he channels his aggressive style in the right direction.”

While Hehir’s departure will be seen as a blow to the Stars, Coast to Coast understands the reigning champions are still hopeful of securing the services of Stephen Wallace. The ex-Manchester Phoenix star has been interesting a number of NIHL teams, but the Billingham native is thought to favour a return to the North East.

Jared Owen has added another couple to his Blackburn Hawks roster, with GB under-18 international Myles Dacres arriving from Bradford Bulldogs and Matt Viney returning for another season. Dacres makes the switch across the Pennines after a prolific year with the Bulldogs, scoring 38 goals with the junior team and 17 in ENL2. Viney missed much of last season following shoulder surgery, but after 6 months of rehab returned to represent GB at the recent IIHF InLine Hockey World Championship in Ingolstadt, Germany. Hawks are also still in the frame to sign Shaun Kippin. The Warriors’ forward held talks with Deeside Dragons over the weekend, but a decision on his destination isn’t expected for around two weeks.

Sheffield Spartans have confirmed three members of the Sheffield Senators team will be stepping up to NIHL1 next season. Defender Danny Mawer, netminder Bob Browne and forward Dan Taylor all enjoyed productive seasons in Division Two last term and Spartans are hopeful the trio will take the promotion in their stride.