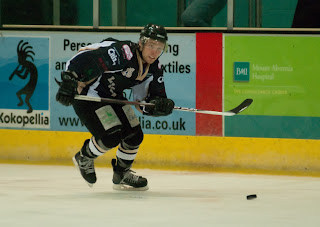 The stylish forward has played over 500 games in the EPL for the likes of Lightning, Swindon Wildcats and Wightlink Raiders, averaging almost a point per game. Brittle (left) has also featured in the Elite League for Belfast Giants and Coventry Blaze and represents a major coup for the Hawks.

Brittle’s signing, first rumoured by C2C earlier this month, has delighted Hawks’ boss Jared Owen: “We found out earlier this summer Adam might be available this season. He was looking at playing a slightly lighter schedule and was struggling to marry his work commitments with time on the ice. We had some chats and he has been attending a few summer hockey sessions.

“Over time, everything fell into place and this week we were able to come to an agreement and put pen-to-paper. This signing is a real step forward for the Hawks and I’m sure Addie will quickly become a fan-favourite.

“I’m grateful to the Arena management for their support in being able to bring a player of this calibre in and the hard work Alan Amos has done to bring in new high-profile sponsors that help make this possible as we look to continue to build a strong team for the upcoming season.”