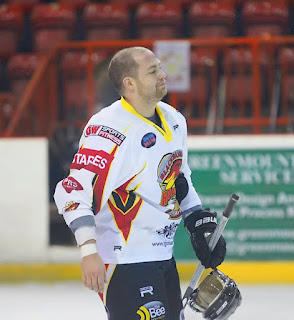 Scott Glover (left) has confirmed he won’t be returning to Blackburn Hawks for season 2012/13. The ex-Sheffield Spartans defenseman is understood to favour a move closer to home, putting his former team in pole position to secure his signature. Newly promoted Sutton Sting are also believed to be interested.

Glover becomes the fourth player to leave Blackburn following the departures of Ric Hughes, Aaron Davies and Brian Worrall. Hawks’ forward Jordan Bannon is also thought to be considering his future, with Deeside Dragons and Trafford Metros both keen to add to their rosters. Interest from the EPL’s Telford Tigers appears to have cooled.

Solway Sharks have made their third signing of the summer with netminder Gary Russell agreeing a fifth season with the club. Coach Martin Grubb was delighted at the signing of Russell, “This season will be tough and games will be won and lost on goaltending,” he said. “That’s what Rusty thrives on and I know he’ll step up and prove he’s the league’s best goalie.”

A number of NIHL North teams are believed to be interested in tempting former Tigers forward Dan MacKriel out of retirement, while Shaun Kippin is thought to be contemplating a move away from Whitley Warriors.