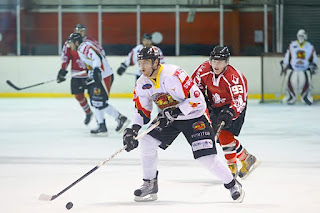 Whitley Warriors have closed the gap on Billingham Stars at the top of ENL1 North. Goals from Jamie Tinsley (2), DJ Good and Shaun Kippin helped them to a 4-3 win over Trafford Metros. Billingham’s lead has beeen cut to three points after their 4-2 loss at Trafford Metros.

Blackburn Hawks are now third after a 6-2 win at Telford Titans – Rick Hughes (left) scored four – and a 5-0 win at home to Solihull Barons. Telford are fourth after beating Sheffield Spartans 4-2. Nottingham’s Joe Wightman scored twice as the Lions moved out of the relegation zone with a 4-0 win against Coventry Blaze.

Guildford Flames have a six point lead at the top of the EPL. Jozef Kohut grabbed the winner as they beat Slough Jets 5-4 after overtime and they followed up with a 4-2 win over MK Lightning. Manchester Phoenix are up to second after a 3-1 success over Lightning and a 6-3 win at home to Swindon Wildcats. 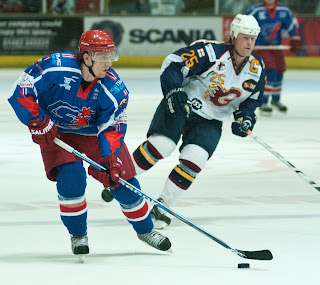 Darius Pliskauskas (right) scored a hat-trick as third-placed Slough beat Basingstoke Bison 3-0, while Sheffield Steeldogs stay fourth after beating Peterborough Phantoms by the same score. Bison closed the gap on fifth placed Lightning to one point with a 5-4 win over the Wildcats. At the foot of the table Bracknell Bees beat Telford 1-0 and the Tigers completed a miserable weekend, losing 8-6 at home to Peterborough – Maris Ziedins scored four for the visitors.

Elite League leaders Belfast Giants are seven points clear after a pair of wins. The beat Cardiff Devils 4-1 and followed up with an impressive 4-2 win against Sheffield Steelers. Nottingham Panthers stay second after a 6-2 win over Dundee Stars, while Sheffield are two points behind in third after beating Hull Stingrays 3-0.