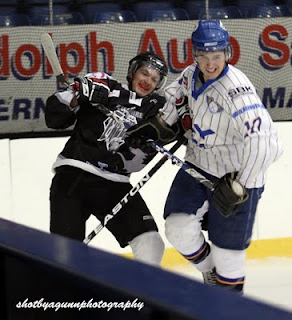 Whitley Warriors have a nine point lead at the top of ENL Division One North. Karl Culley (2) and Callum Watson helped the Warriors to a 3-2 win over Coventry Blaze ENL. Nottingham Lions move into second place following victories over third placed Coventry (3-2) and a 9-4 home win over Blackburn Hawks who are fourth. Just one point separates the Lions and fifth placed Sheffield Spartans who surprisingly lost 6-3 at home to Telford Titans.

The Shropshire outfit have climbed off the bottom of the table after three wins from their last four games. The Titans split the points in a double header against the Hawks, recovering from 3-0 down at home to win 5-4 before losing by the odd goal in five at Blackburn Arena. A 2-0 home success over Trafford Metros puts the Titans in sixth place and leaves the Metros rooted to the foot of the table – a point behind Northern Stars.

Solihull Barons retained their 100% record in Division Two with an impressive 13-3 win over Flintshire Freeze. Richard Slater bagged a hat-trick for the Barons who have now hit double figures six times from nine matches. Kingston Jets closed to within four points of Flintshire with victories over Sheffield Senators (8-4), Bradford Bulldogs (7-3) and Sutton Sting (9-3).

Wightlink Raiders and Invicta Dynamos are locked together at the top of ENL Division One South although the Raiders have played a couple of games more. Streatham Redskins and Chelmsford Chieftains are close behind with the battle in the south shaping up to be much closer than in the north.

Fife Flyers’ (above) continue to dominate the Northern League. They hit nine past Northern Stars and repeated the feat against Flintshire Freeze with Marc Fowley notching a hat-trick. Flintshire have endured a torrid time of late with losses to Sheffield Spartans (9-2) and second placed Solway Sharks. Hat-tricks for Mark Gallagher and Chris Wilson helped the Sharks to a 10-2 win which leaves them four points adrift of Fife. Whitley remain in third place following a 3-3 draw with the Sharks.

Manchester Phoenix still lead the way in the EPL after a run of four wins from five matches. Peterborough Phantoms were easily despatched 6-2 before Tony Hand’s men shared the points from a double header weekend with title rivals Guildford Flames. Tom Duggan’s empty net strike with just twenty seconds remaining secured a 3-1 victory in Guildford but the Flames gained their revenge in Altrincham triumphing 4-3. Phoenix recovered from this setback defeating Bracknell Bees 7-3 and Telford Tigers 5-4 after a shoot-out with Stephen Wallace notching the tie-breaking goal.

Sunday’s return in Basingstoke produced a remarkable turnaround inspired by the evergreen Moria. Trailing 3-1 at the end of the second period he scored twice to send the game into overtime with the equaliser coming with just 14 seconds left on the clock. Ondrej Lauko broke the deadlock during the extra period to give Bison a valuable two points. Lightning responded in fine style with two 6-2 victories over Peterborough and Telford and now sit in fifth.

Nottingham Panthers, Sheffield Steelers and Coventry Blaze have cranked up the pressure on Belfast Giants at the top of the Elite League. The Panthers and Steelers gained a victory over each other and have remained unbeaten since with Nottingham winning four and Sheffield five. Coventry have won four in a row and remain firmly in contention.