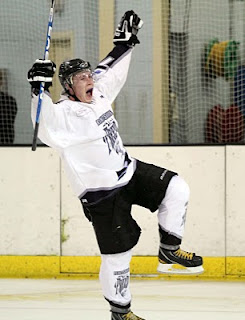 Sheffield Spartans notched a couple of home victories as they opened their English National League Division One season in style. A 4-2 win over Blackburn Hawks was followed by a 3-0 shut-out of Nottingham Lions with netminder Andy Bagshaw in impressive form. Coventry Blaze ENL had a weekend on the road and came away with four points. Two goals each for Phillip Pollok and Antti Kohvakka completed a 4-0 win over Telford Titans. Pollok continued his goalscoring form on Sunday as he bagged his third of the season at Blackburn. Despite Aaron Davies’ opener the Hawks couldn’t add another with Blaze netminder Josh Nicholls deservedly getting the MVP to help his team to a 3-1 win. Whitley Warriors kept their 100% record in following a hard fought derby win over Northern Stars. A Richie Thornton strike in the 42nd minute was the only goal of the night. The Stars recovered from this setback with victories over Trafford Metros (4-3) and Telford Titans (3-1).

Kingston Jets started life in Division Two with two resounding wins. Lancashire Raptors travelled to the East coast and were despatched 10-5. The Jets then travelled to face Sutton Sting and comfortably took the points with a 6-3 scoreline. Flintshire Freeze hit ten past Sheffield Senators with Chris Jones (above) and Simon Furnival both grabbing hat-tricks. Solihull Barons joined the Jets and Freeze on four points after a 7-1 demolition of Bradford Bulldogs.

Fife Flyers kicked off their Northern League campaign with a rout of Whitley Warriors. The scores were tied 3-3 at the end of the second period but the Flyers turned on the style in the third and cruised to a 10-3 win. Steven Gunn hit a hat-trick for the Flyers. The Warriors recovered some pride the following day by grabbing a point from reigning champions Solway Sharks. Karl Culley’s strike with ten minutes on the clock looked to have sealed the victory but Graeme McCamley tied the game with just four minutes left. With Sheffield Spartan’s 4-2 win over the Hawks also counting towards the Northern League this has left the Yorkshire outfit with maximum points from three games.

Dundee Stars are enduring a torrid start to life in the Elite League. Saturday’s trip to Sheffield to face the Steelers resulted in a thumping 7-0 reverse. The following day the Stars returned home to face the unbeaten Nottingham Panthers who cruised to a 9-4 success. The win completed an excellent weekend for the Panthers who had overcome Cardiff Devils 5-4 the previous day. Belfast Giants took maximum points from a double header with Coventry Blaze by following up a 4-2 success in Northern Ireland with a 3-2 win in the SkyDome Arena.