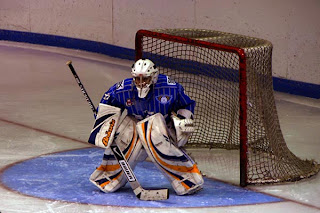 Whitley Warriors moved a step closer to retaining their English National League Division One North title with a 6-3 road success over Blackburn Hawks. Coventry Blaze ENL stay in second after beating Trafford Metros 6-1. The Hawks and Blaze, along with Nottingham Lions and Sheffield Spartans, are battling for the remaining three play-off slots.

Wightlink Raiders have opened a five point gap over Invicta Dynamos at the top of ENL Division One South. Jeremy Cornish’s men destroyed title rivals Chelmsford Chieftans 8-3 and extended their winning run to twelve with a 5-4 success at Milton Keynes Thunder.

Fife Flyers’ 6-2 win over Solway Sharks keeps them at the top of the Northern League. Marc Fowley and Stephen Gunn both scored twice while netminder Blair Daly (above) gained a well deserved MVP having faced 38 shots – conceding just twice. Whitley’s win in Blackburn keeps them level on points with Fife although the Scottish outfit have played three games fewer.

Guildford Flames have closed the gap to Manchester Phoenix to just two points at the top of the English Premier League. Lukas Smital’s overtime winner helped the Flames to a 2-1 home success over Phoenix before Nathan Rempel’s four goal haul completed a miserable weekend for Manchester as the Flames triumphed 5-4 in Altrincham. The Elite League’s all-time leading scorer, Adam Calder, enjoyed mixed fortunes on his EPL debut for third placed Slough Jets. Calder bagged an assist during the Jets’ 5-3 win over Basingstoke Bison but despite scoring against Peterborough Phantoms, he couldn’t prevent the Jets from falling 3-2. Basingstoke stay in fourth place after grabbing a point following a 2-1 overtime loss to Swindon Wildcats. Reigning champions MK Lightning are fifth with games in hand on all their rivals. They notched a trio of wins – beating Bracknell 6-5 in overtime and Telford twice (7-1 & 3-1).

Cardiff Devils’ record breaking 22 game unbeaten run in the Elite League has come to an end following a dramatic penalty shoot-out at Dundee. Former Devil Jay Latulippe fired home the shoot-out winner for the Stars to secure a 2-1 victory. Sheffield Steelers hit 18 past Edinburgh Capitals and followed up with a 4-2 win over Coventry Blaze to keep up the pressure on Cardiff and Belfast Giants at the top of the table.