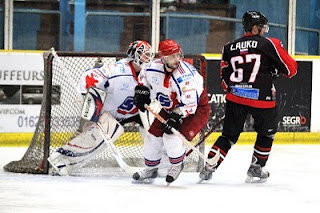 Whitley Warriors have retained their English National League Division One North crown. Martin Crammond bagged a brace for the Warriors as they beat Telford Titans 4-1 to secure a second consecutive title. Nottingham Lions thumped Trafford Metros 6-1 to strengthen their play-off hopes and Sheffield Spartans beat Coventry Blaze 5-2 to remain in the hunt. Northern Stars beat Trafford Metros (5-4) and Blackburn Hawks (4-3) and with games in hand may yet challenge for an end of season slot.

Solihull Barons beat Sutton Sting 8-5 to move nine points clear at the top of Division Two North. Dean Tonks and Richard Slater both grabbed a pair for the Barons who have dropped just one point all season.

Division One South title rivals Wightlink Raiders and Invicta Dynamos played out a thrilling 3-3 draw in front of a packed Ryde Arena. Wightlink struck first through Dom Hopkins before Invicta debutant Jack Tarczycki scored the first of his two goals to level the game at 1-1. Jason Gorrie and Alex Murray put the Raiders 3-1 up and looked to be heading for a vital win, but Corey Watkins put the Dynamos back in the hunt. A controversial penalty call against Raiders player-coach Jeremy Cornish gave the visitors the extra man and with just a minute left on the clock, Tarczyzki’s strike tied the game.

Guildford Flames’ English Premier League title hopes suffered a double blow with a pair of defeats. The Flames fell 5-2 to Basingstoke Bison – Ollie Bronnimann hit a hat-trick for the hosts – and slumped 5-3 at home to Slough with Adam Calder and Slava Koulikov (above) both scoring twice for the Jets. Calder’s brace completed an impressive week for the Canadian. He grabbed a pair during a 9-1 demolition of Bracknell Bees and three assists as the Jets beat Telford Tigers 6-3.

Manchester Phoenix remain top after a mixed weekend. Blaz Emersic and Andre Smulter both scored twice for MK Lightning as Phoenix fell 6-3, but the Manchester outfit secured a vital 6-4 win over Peterborough Phantoms to move four points clear of the Flames. Lightning’s Adam Carr grabbed a couple in a 5-0 shut-out over Sheffield Steeldogs while Basingstoke recovered from 3-1 down to beat Telford 4-3.

Cardiff Devils consolidated their position at the top of the Elite League with wins over Braehead Clan (4-0) and Hull Stingrays (3-1). Sheffield Steelers beat Belfast Giants (5-4) and Dundee Stars (7-0) to move into second place with the Giants falling to third.