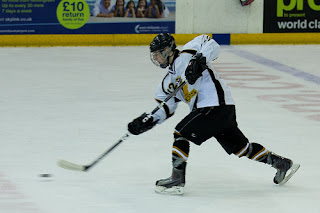 Billingham Stars lost their unbeaten ENL1 North record as they fell to a shock home defeat to Nottingham Lions. Stars had made it 15 games unbeaten with a 1-1 draw at Coventry Blaze and were expected to triumph over the Lions, but goals from Michael Rose, Danny Rose (left) and Christy Johnson-Brown secured a 3-2 win for Nottingham.

Whitley Warriors closed the gap on Stars to five points with a pair of wins over Blackburn Hawks. Dean Holland scored twice for Warriors in a 5-2 road success and two goals by DJ Good helped them to a 4-2 win at Hillheads. 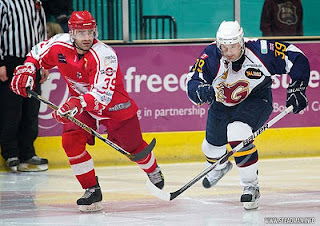 Guildford Flames’ 6-2 win over Swindon Wildcats keeps them top of the EPL. Curtis Huppe (right) scored three for Flames who lead the way on goal difference from Slough. The Jets beat Bracknell Bees 7-2 – Darius Pliskauskas hit a hat-trick – and recorded an impressive 5-3 at Manchester Phoenix – Adam Calder scored twice for the visitors.

Sheffield Steeldogs lost 3-2 at MK Lightning, but beat Telford Tigers 6-4 to stay in third. Lightning are fourth after beating Peterborough Phantoms 4-2. Tom Duggan scored three for Phoenix as they won 5-1 at Basingstoke. Bison also lost to Bracknell 3-1, while Swindon won 5-2 against Peterborough.