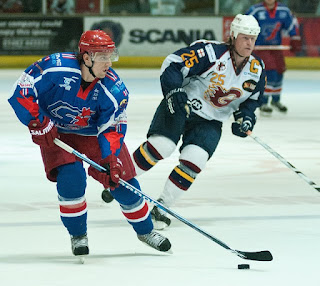 Slough Jets clinched the EPL play-off crown after a thrilling weekend at Coventry Skydome. Jets reached the final after edging past treble chasing Guildford in the last four. Flames looked to be on track when they moved 2-0 in front, but goals from Ryan Watt (2) & Aaron Connolly saw Jets home.

The other semi-final saw Manchester Phoenix beat Sheffield Steeldogs after a penalty shoot-out. Phoenix led 5-2 early in the third but Sheffield fought back to draw level and force overtime.

With neither side able to find a winner in the extra period, penalty shots were needed. Janis Ozolins scored for Sheffield, but Juraj Faith and Stephen Wallace both hit the target to send Phoenix through.

Slough quickly took control of the final with Adam Calder and Doug Sheppard putting them 2-0 up. Ciaran Long pulled one back just before the end of the first, but Jets’ forward Darius Pliskauskas (above) capped an excellent Jets performance with a pair of goals to seal a deserved 4-1 win. 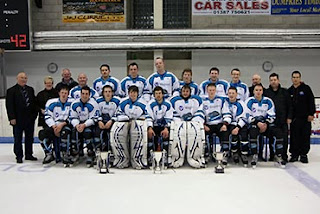 Solway Sharks (right) celebrated their ENL2 North title win in style with an 11-0 win at home to Flintshire Freeze. Struan Tonnar (5) & Nathan Slaem (3) led the scoring for Sharks who finish the season with a 100% league record.

Fylde Flyers completed their first ENL campaign with a 7-0 success at Lancashire Raptors.