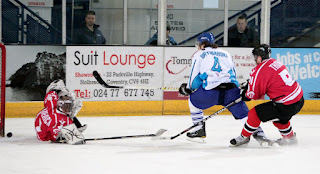 Whitley Warriors have closed the gap on Billingham Stars at the top of ENL1 North. Shaun Kippin and Callum Watson both scored twice as Warriors beat Solihull Barons 8-4. They now trail Stars by four points with a game in hand with the teams set to meet at Hillheads on March 4th. Blackburn Hawks are three points further back in third after winning 5-0 at Sheffield Spartans.

Telford Titans are in the final play-off place after drawing 1-1 at Billingham. Coventry Blaze boosted their hopes of avoiding the drop with a 6-3 win over Solihull – Josh Nicklin (3) & Rikki Bryniarski (above – 2) led the scoring.

Solway Sharks have won the ENL2 North title after being awarded a default win over Bradford Bulldogs. Sutton Sting remain in the promotion play-off position after an 8-1 win at Lancashire Raptors. Flintshire Freeze beat Bradford 6-1 to stay third. Fylde Flyers were surprisingly held 3-3 at home to the Raptors, but won 5-2 at Sheffield Senators to move out of the bottom two. 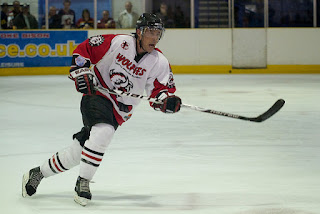 EPL leaders Guildford Flames kept their title push on track with a pair of wins. They beat Basingstoke Bison 3-0 and followed up with a 9-1 demolition of Swindon Wildcats – Nathan Rempel scored three. Manchester Phoenix are second after beating MK Lightning 5-2, while third placed Slough Jets recovered from a 5-3 loss at Swindon to record wins over Peterborough Phantoms – 5-4 after overtime – and Telford Tigers 5-1.

Stuart Brittle’s overtime winner sealed a 3-2 win for Sheffield Steeldogs at Bracknell Bees. Basingstoke are up to fifth after a 3-1 win over the Bees and a 7-6 shoot-out success at Peterborough – Steve Moria (above) scored the winner. Tuomas Tikkanen and Grant McPherson both scored two as Lightning beat the Wildcats 6-3.

Sheffield secured a place in the final of the EPL with a 1-0 aggregate success over MK Lightning. They will meet the winners of Manchester and Guildford who drew their first leg 2-2.

Belfast Giants keep their nine point lead at the top of the Elite League after two home wins. They eased past Hull Stingrays 6-1 and followed up with a 7-1 win over Fife Flyers. Sheffield Steelers stay second after beating Dundee Stars 5-4 and Nottingham 4-2, but missed the chance to close the gap with a 5-1 loss to the Panthers.