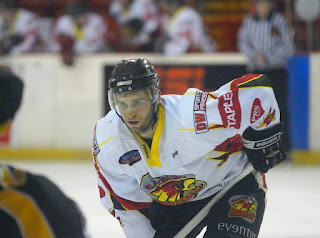 Blackburn Hawks moved into the ENL1 North play-off final after a thrilling double-header against Whitley Warriors. A dominant first period on home ice saw the Hawks race into a 5-1 lead, before two goals from DJ Good brought Warriors back into it.

With the tie finely balanced at 5-3, Hawks stunned the Warriors back at Hillheads as Tom King (above) and Rick Hughes extended the lead to four by the end of the first. Sami Narkia put the visitors further in front, but Warriors refused to lie down and two quick goals by DJ Good and Jordan Barnes made it 8-5 overall. King added his second of the night just before the second buzzer, but Good replied again early in the third. Narkia quickly made it 10-6 before Barnes reduced the deficit once again. King completed his hat-trick three minutes from time to complete an 11-7 aggregate win for the Hawks.

They now await the winners of the semi-final between Billingham Stars and Telford Titans. 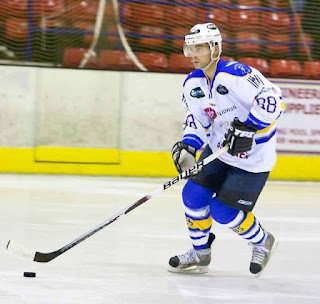 Solway Sharks kept their perfect record intact in ENL2 North with a 5-2 win at Sheffield Senators – Nathan Salem (3) & Bob Chalmers (2) got the goals. Sutton Sting warmed up for their promotion play-off against Nottingham Lions with a 10-3 win at Sheffield the following evening. Fylde Flyers beat Flintshire Freeze 13-8 – Andy Clark (5) and Elvis Veldze (4) led the scoring for Flyers.

Romford Raiders secured the ENL1 South title after a pair of comfortable home wins. They overcame Slough Jets 11-2 and followed up with a 5-2 success over Wightlink Raiders – Juraj Huska (right) grabbed a couple for Romford.

EPL champions Guildford Flames finished the regular season on a high with victory at home to Sheffield. Flames went into the game on the back of a 4-3 overtime loss to Basingstoke Bison, but capped a memorable campaign with a 7-2 win at home to the Steeldogs – Curtis Huppe (below) and Andrew Sharp both bagged a couple. Manchester Phoenix finished second after splitting their weekend series with Peterborough. Luke Ferrara’s overtime winner gave Phantoms a 5-4 victory on home ice, but Phoenix gained revenge in the return fixture winning 3-2. 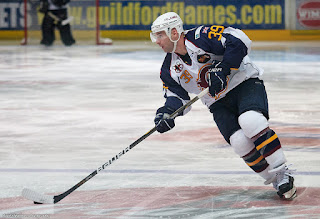 Sheffield sealed third with a 5-2 win over Bracknell Bees, while Slough Jets ended in fourth after a 4-3 win at MK Lightning. Two goals from Leigh Jamieson helped Lightning to a 3-2 win in the reverse fixture. Loris Taylor and Aaron Nell both scored two as Swindon Wildcats ended Bracknell’s hopes of qualifying for the play-offs as they lost 7-3. Bottom club Telford Tigers ended on a high with a 1-0 win at home to Basingstoke – Adam Taylor scored the only goal.

Hull Stingrays provided the shock of the Elite League play-off quarter-finals with a 7-4 aggregate win over Sheffield Steelers. Nottingham Panthers are also through to the semi-final after a 5-4 win over Braehead Clan. Champions Belfast Giants easily disposed of Dundee Stars with a 14-0 two-leg shut-out and Cardiff Devils complete the quartet after seeing off Coventry Blaze 7-4.