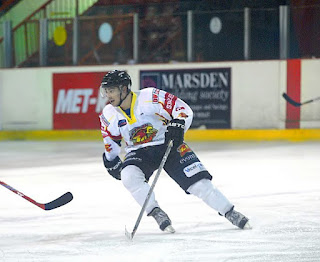 Blackburn Hawks kept their hopes alive with a 3-0 win at Nottingham Lions – Rick Hughes, Chris Arnone (above) and Jared Owen were on the scoresheet. Telford Titans joined Stars, Hawks and Whitley Warriors in the play-offs after drawing 2-2 at Coventry Blaze and a 6-3 win at Trafford Metros.

ENL2 North champions Solway Sharks made it 25 wins out of 25 with a 10-0 win over Flintshire Freeze – Nathan Salem (4) and Adam Reynolds (3) led the scoring. Sutton Sting secured second place – and a promotion play-off game against either Coventry or Nottingham – after beating Bradford Bulldogs 4-0.

Flintshire saw their promotion challenge end as they slumped to a 4-2 defeat at home to Hull Stingrays. Sheffield Senators enjoyed a four-point weekend winning 11-4 at Fylde Flyers and 7-2 at Lancashire Raptors.

Romford Raiders edged closer to the ENL1 South title after a 13-2 win at home to Slough Jets. Raiders are two points clear of Chelmsford Chieftains with just three games to go. Chieftains stay in the hunt after a 9-0 win over MK Thunder.

Wightlink Raiders secured the third play-off slot with an 8-5 win at home to Cardiff. The Devils remain fourth after beating Bristol Pitbulls 6-2. Invicta Dynamos’ hopes of catching the Devils suffered a blow as they fell 4-3 at Streatham Redskins, but a 4-1 win at home to Wightlink keeps them just two points behind Cardiff. 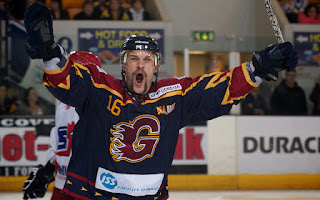 Guildford Flames’ lead at the top of the EPL is down to eight points after splitting their weekend series with Slough. Two Doug Sheppard goals helped Jets to a 5-2 win on home ice, but Nathan Rempel’s (right) early marker set Flames on their way in the return as they ran out 4-1 winners. Second placed Manchester Phoenix took four points from their double header with Telford Tigers, winning 4-2 at home and 4-3 on the road.

Sheffield Steeldogs are third after a 6-2 midweek win over the Tigers. Adam Carr (2) and Tuomas Tikkanen (2) led the way as MK Lightning beat Bracknell Bees 6-4 and they followed up with a 3-2 shoot-out success at Peterborough Phantoms – Blaz Emersic scored the winner.

Bracknell completed a miserable weekend, losing 6-3 at home to Basingstoke Bison. Aaron Nell celebrated his call up to the GB squad with a pair of goals as Swindon Wildcats won 5-1 at home to Sheffield.

Belfast Giants sill lead the way in the Elite League. They won twice at Edinburgh Capitals – 6-3 & 8-0 – to stay seven points clear of Sheffield. The Steelers missed the chance to close the gap with a 4-3 loss in overtime at Braehead, though they gained their revenge on the Clan with a 6-2 win at home.

Steelers also won 4-0 at home to Cardiff Devils and are seven points behind the Giants with two games in hand. The teams meet twice in Belfast next weekend. Nottingham Panthers slumped to a shock 8-3 loss at Dundee Stars, but stay third after a 4-1 win at home to Hull Stingrays.