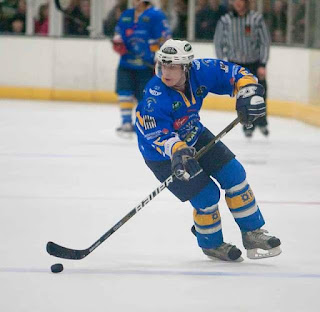 ENL1 North champions Billingham Stars kept their Double hopes alive after a bruising play-off semi-final against Telford Titans. Stars followed up a 3-1 road success with a 2-1 win on home ice to set up a final clash with Blackburn Hawks.

Guildford Flames moved into the EPL play-off semi-final but were pushed all the way by Peterborough. The Phantoms took a narrow 3-2 lead to Guildford and looked to be heading for a shock win as they extended their aggregate lead to three. The champions recovered in style to seal a place at Coventry with a 10-7 overall win. 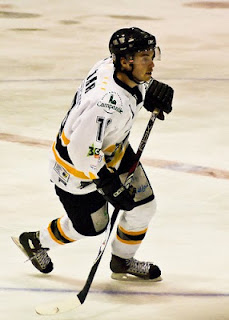 Flames now meet Slough Jets who edged a thrilling tie against MK Lightning. Two goals each from Adam Carr (right) and Leigh Jamieson helped Lightning to a 7-4 win on home ice, but Jets bounced back in the return leg with a 7-3 overtime success – Mindy Kieras grabbed the winner.

Manchester Phoenix comfortably disposed of Swindon Wildcats to move into the final four, winning 2-1 on the road and 4-0 back in Altrincham. Sheffield Steeldogs complete the line-up after they eased past Basingstoke Bison 4-2 on aggregate.

Nottingham Panthers won the Elite League play-off title after beating Cardiff Devils. Third period goals from David-Alexandre Beauregard and David Clarke helped Panthers to a 2-0 success which saw them complete the Challenge Cup/Play-off Double for the second year in succession.