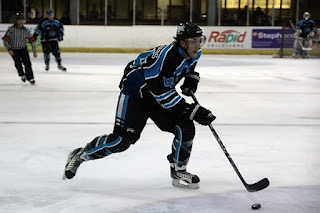 Solway Sharks began life in NIHL1 North with a pair of wins – but had to survive an almighty scare along the way. Saturday’s league game at home to Trafford Metros, saw goals Nathan Salem (2), Adam Reynolds (left) & Steven Moore give Sharks a comfortable 4-0 win. The following evening they travelled to face Blackburn Hawks in the Trans Pennine East/West Trophy, but trailed 3-0 early in the second – Myles Dacres, Ric Ravey & Dave Meikle got the goals. Sharks fought back to level at 3-3 through Reynolds, Salem & John Connolly. With the game looking set for a tie, Hawks’ captain Chris Arnone took a needless cross-checking penalty and Reynolds took full advantage on the powerplay to make it 4-3.

Whitley Warriors had a mixed weekend winning 5-2 in the league at Sheffield Spartans – Dean Holland scored twice – but suffered a 4-2 reverse in the cup at home to Billingham Stars – Adam Robinson (2), Andy Finn & Michael Bowman bagged Stars’ goals. Sutton Sting came from behind to grab a 3-3 draw at home to Coventry Blaze.

Bracknell Hornets moved to the top of NIHL1 South after an 8-6 home win over Cardiff Devils and a 6-4 success at Solent & Gosport Devils. Romford Raiders beat Invicta Dynamos 4-2 in the South East Trophy, while Chelmsford Chieftains enjoyed a pair of wins over Wightlink Raiders. Julius Sinkovic scored twice in their 4-2 road success, while Gary Clarke’s hat-trick helped them to a 6-2 victory on home ice.

Guildford Flames began the defence of their EPL title with a pair of wins. Curtis Huppe’s hat-trick helped Flames to an 8-2 win at home to Telford Tigers and they followed up with a 6-3 win at Bracknell Bees – Dave Longstaff scored twice. Basingstoke Bison started their campaign with a 4-1 win at home to Bracknell Bees – Greg Chambers scored two – and a 2-1 victory at Manchester Phoenix. Ciaran Long scored the shoot-out winner for Phoenix in their 4-3 win at Swindon Wildcats. Slough Jets beat Sheffield Steeldogs 5-2 – Darius Pliskauskas scored a couple – but Steeldogs recovered to beat Swindon 5-4 after overtime – Greg Wood hit the winner.

Sheffield Steelers took four points from their Elite League double-header against Coventry Blaze. Tylor Michel hit a hat-trick in their 7-5 win on home ice and they followed up with a 4-3 overtime victory at the Skydome. Belfast Giants ran out 5-3 winners at Nottingham on Saturday, but the Panthers gained revenge the following evening with a 3-2 shoot-out success. Fife Flyers beat Braehead 5-1 – Casey Haines & Kris Hogg both scored two – but Clan bounced back to beat Cardiff Devils 4-3 after a shoot-out. Dundee Stars edged past Hull Stingrays 3-2.