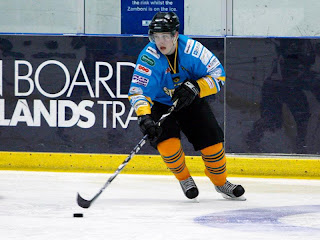 Matt Jeffcock (left) and Scott Glover have agreed another year with Sutton Sting. Coach Ian Johnson has been busy building in roster for the upcoming NIHL1 North season and was delighted to secure the pair: “Matt was strong and dependable last season, despite having it tough both on and off the ice,” said Johnson. “He had a lot on his plate, but his true character shone through and he managed to stay focused when others would have faltered.”

Jeffcock and Glover helped Sutton to third place and a play-off semi-final appearance last time around and both are keen to progress further: “After joining Sting two years ago I feel my game has improved remarkably,” said Jeffcock. “I now feel I’m contributing towards the team in more ways. It’s an absolutely cracking set of lads and I wouldn’t want to play anywhere else.”

Glover echoed his team-mate’s comments: “I’ve known Ian a long time and he asked me the year before to join, but I made the decision to sign for Blackburn as I didn’t want to drop down a league. As soon as Sutton won promotion Ian contacted me and I was happy to get offered a spot on this exciting up and coming team. It was a good season last year and we have a great bunch of guys here who will only get better.”

Solway Sharks’ defenseman Craig Mitchell has left the club to join Braehead Clan in the Elite League. Mitchell becomes the third member of Sharks’ double-winning squad to move on following the departures of Nathan Salem and Declan Balmer. Blackburn Hawks are believed to be interested in signing two experienced EPL forwards this summer.

Reigning NIHL2 North champions Nottingham Lions have announced they will stay in Division Two. Lions have cited financial and travel issues as the reasons behind their decision. Solihull Barons trio Perry Doyle, Adam Andrews and Mike Rodger are understood to be considering a move to Coventry Blaze. Deeside forward Brian Worrall has confirmed his departure from the Dragons – a switch to Trafford Metros looks to be on the cards.

In NIHL1 South Chelmsford Chieftains have surprisingly released forward Danny Hammond. However, Slovakian ‘D’ man Tibor Schneider has been agreed another year with the club. Invicta Dynamos have signed their first import of the summer, with Juraj Huska making the move from Romford Raiders. Nat Rose has joined Wightlink Raiders from Invicta, while Nick Compton has confirmed a second season on the island. NIHL2 South newboys London Racers have secured the services of Ali Band from Cardiff Devils.