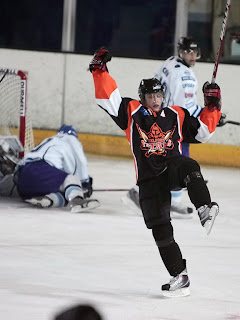 Telford Titans have made their first signings of the summer, with Karol Jets (left), Mike Roden and Luke Haywood all agreeing another year with the club.

Titans’ boss Rob Blakemore also confirmed Josh Hustwick and Cameron Blakemore have stepped up to senior level from the Trojans’ U18s team, while he is still in talks with a number of last year’s squad as the build-up to the new NIHL North season continues.

As first rumoured by C2C, Trafford Metros have signed Czech forward Lukas Zeman. The 21-year-old previously played for KLH Chomutov and HC Klasterec nad Ohri in the Czech Republic. Zeman will be joined on the Metros’ roster by returnee Cade King.

Netminder James Flavell has returned to Billingham Stars after a spell in the EPL with Sheffield Steeldogs. Mark Good and Ben Richards have agreed another season with Whitley, while Warriors have also signed Daniel Murdy from Solway Sharks. Sheffield Spartans have added Jonathon Kirk and Thomas Parkinson to their roster.

Coventry Blaze quartet Josh Nicklin, Philip Pollok, Josh Gent and Rhys Gillat have all returned for another season. Widnes Wild have signed Marc Etherington from Trafford, while ex-Fylde Flyers pair Dan Etherington and Greg Ruxton have also been added to the roster along with youngster Tom Ratcliffe. Nottingham netminder Alan Levers has agreed another season with the Lions.

In NIHL1 South Nicky Lewis is back for a fourth season with Invicta Dynamos, while Streatham have signed James Warman from Cardiff Devils. Redskins have also confirmed Jamie McIlroy, Liam Rasmussen and Evander Grinnell have agreed another year with the club.