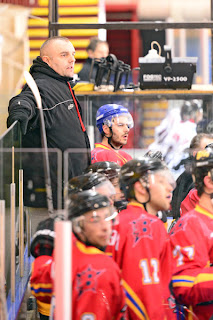 Simon Leach has returned to Whitley Warriors as Head Coach. Leach (left) stepped down as Billingham Stars boss earlier this week and Warriors have moved quickly to bring him back to Hillheads. During his previous spell with the club, Warriors claimed the NIHL1 North league and play-off titles in consecutive seasons.

Leach had this to say about his return: “It’s all happened very quickly – it’s been a bit of the whirlwind to be honest. I’m happy to be back at my home town club and ready to start a new chapter in my hockey career. I enjoyed my time at Billingham and was treated very well by everyone connected with Stars, but anyone would be excited to be back at their home town club.”

Leach has appointed former teammate Darren Taylor as his Assistant and is expected to make forward Adam Reynolds his top transfer target. Reynolds was part of the two-time double winning squad and has since enjoyed a productive spell with Solway Sharks, but confirmed to C2C he wants to join a team closer to his North East home. Warriors are thought to be in pole position to sign Reynolds, but they may face stiff competition from Billingham. Stars are also believed to be interested in re-signing netminder James Flavell.

Trafford Metros have confirmed their first two signings of the summer, with Jake Nurse and John Murray agreeing another year with the club. Telford Titans have appointed Rob Blakemore as their new Head Coach. C2C understands Thomas Stuart-Dant could be on his way to NIHL North, with a number of clubs believed to chasing the forward. Stuart-Dant spent last season in Canada’s KJHL with Selkirk Fishermen and in the FHL with Danbury Whalers.