Like every player, coach, organisation and fan, broadcasters like Aaron Murphy are getting excited as the season reaches the play-off phase.

Eight teams remain, with four going through to the finals weekend in Nottingham and FreeSports will be following the action.

So, who better to cast an independent eye on the four ties taking place than the station’s commentator, who spoke to us about the games coming up and how they may pan out.

Follow Murph on Twitter @MurphOnIce and catch him, along with Paul Adey when they cover the Cardiff Devils vs Sheffield Steelers game on Sunday, live on FreeSports from 5.30pm.

“I don’t think there will be any favours given in this one.  At one point, the Giants were 11 points behind Cardiff so to close that gap then snatch the title from them was quite incredible.

“When you look at Coventry, we had them on TV last week and they were beaten soundly by the Giants so you wondered at the time if that was a Blaze team that could stop the Devils from winning the title.

“Danny (Stewart) had a plan to go out and win that big game so sentiment will be gone when these two come together.  You don’t want to jinx the Giants as they’re going for the Grand Slam now.

“They have a chance to do something really special as a group after winning the Challenge Cup and the league title before they go off for the summer.

“Coventry have been in play-off mode for a while now, it stands to you when you maybe get to the final period of a quarter final and you’re at 1-1.  You’ve already fought for your lives for many weeks.

“That being said, the Giants looked very good against Coventry last week.  Beskorowany seems to be lights out for them, but the Blaze will be buoyed by beating the Devils on Sunday, but they know it will be a tough one against the Giants.” 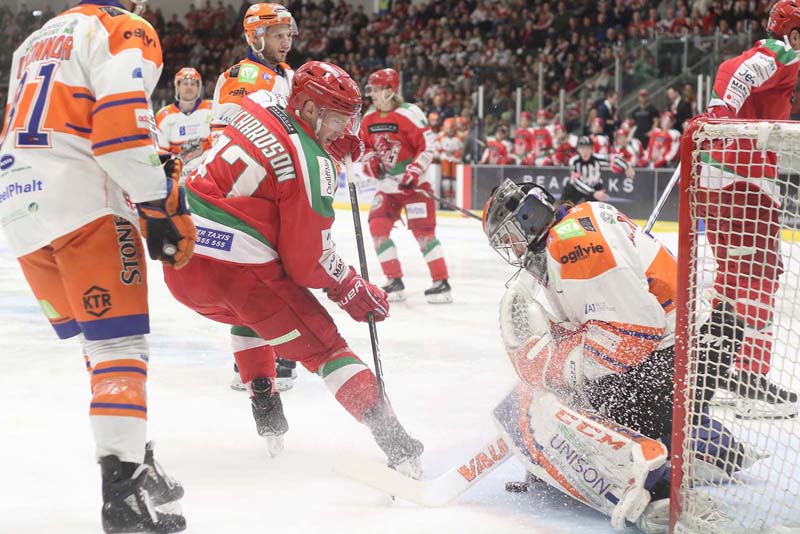 “These are two different teams from the ones we’ve seen in the play-off finals the last two years, which were classic match-ups.

“Sheffield have had a different kind of season, especially coming in as seventh seed, while Cardiff as the second seed can just think about the play-offs.

“I expect this to be a really tough match and for me, looking at Sheffield and how they’ve played, Tom Barrasso has shown he can come in with a game plan and get a result.

“I don’t think anyone would have wanted to come up against the Steelers in this quarter final, so I’m expecting a tough game played more like two rivals than second versus seventh.

“He’ll have his core group there and if they’re not focused, Sheffield will catch you, especially starting in Sheffield on Saturday.

“You don’t want to be down a couple of goals going back to Cardiff on Sunday and I think this could be the closer of the affairs in the quarter final round.”

“Fife have had some injury problems so a lot could depend on who’s in their line-up on Saturday.  It’s incredible to look at the Panthers, who were so inconsistent at times to end up with the number three seed.

“I guess it depends which Panthers team shows up and if it’s the team that beat Cardiff earlier this year in the game that was live on FreeSports, then they could look unbeatable at times.

“But if the Nottingham side that can drop three or four against teams lower in the standings, then it could open up for Fife.

“There’s more pressure on the Panthers to get to that finals weekend, because it’s in their arena.  You do not want someone else in your locker room and partying in your barn.

“This was a team who made a coaching change from Chernomaz to Strachan, they still had a chance to advance in the Challenge Cup, but that didn’t pan out for them.

“They want to be in the big dance and they could salvage their season with this.  If they don’t get through, it will be a kick in the teeth with a new team and a new coach and there’s an incredible amount of pressure for Panthers to make it to the final four.”

“Glasgow had a win there in Fife to close off the regular season, but since winning the Conference they tailed off with that losing streak.

“Guildford has a good a first line as any in the league and if you’re coach Pete Russell, if you try and shut down the Dunbar/Reddick/Watters line, that’s one thing.

“If you stay off the powerplay and don’t allow Calle Ackered to quarterback that’s something else. Glasgow start in Guildford on Saturday so when the tie comes back, they’ll know what they have to do on home ice.

“The big thing for Glasgow is discipline and getting the confidence back to where they were before, but it’s important they get away from the bad habits that led to the form they’ve been on.

“This is a team that were looking good for third, but have slipped to fourth against a good Guildford team who made the Challenge Cup Final.  Bear in mind, Flames are Conference champions in their own right too.

“Coach Dixon will have them going and they have two number one goalies so they can change things up and that first line is so dangerous, you don’t want to be coming back to Glasgow a couple of goals down.”

SO, WHO WILL BE IN THE FINAL FOUR?

“I think the Giants are a team on a mission and when the chips were down in being 11 points behind Cardiff, they got it done.  They defended the Challenge Cup and won a very difficult Conference as well so I think they’ll do it against Coventry.

“Cardiff and Sheffield will be interesting as well, but with the Devils having that stinging sensation for letting that ‘three-peat’ slip, I expect them to be too tough for Sheffield, with Ben Bowns coming back to form in the big game.

“Guildford will give Glasgow problems and the way Paul Dixon has had his team playing, I think they’ll slide past the Clan.

“And I think Nottingham will just about make it past Fife because of the Flyers’ injury problems.”

Who do you think will make the final four?  Let us know by adding a comment below.

Sheffield Steelers captain Jonathan Phillips admits his team can be called underdogs when they take on Cardiff Devils in this weekend’s play-off quarter finals. Both sides have contested the last two finals and come together [Read more…]

Good morning, hockey fans! We’re at hump day so check out what’s been happening around the country as we bring you the headlines this morning — Sheffield Steelers delivered the biggest story of the day [Read more…]

In the final British Ice Hockey Podcast of 2019, we look ahead to a very busy festive period for the sport.