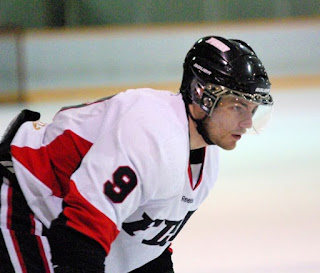 Sutton Sting have confirmed the signing of Canadian Thomas Stuart-Dant from Danbury Whalers. As exclusively revealed by C2C earlier this week, the 22-year-old forward is heading to NIHL1 North after spending last season with the Whalers in the FHL and Selkirk Fisherman of the KJHL.

Sting boss Ian Johnson believes Stuart-Dant is a real coup for his team: “We were contacted by Thomas’s father, like a few teams were, about the potential for him to travel and play in the UK next season,” said Johnson. I was keen to see how this could pan out and spoke with ex-GB Coach Jon Rowbotham to get the inside information on Thomas. Jon came back and said he would be a great addition to our roster and we should definitely look to bring him in. After a number of emails to and from Canada we managed to sort out the right deal and we’re really pleased he accepted our offer.”

Stuart-Dant averaged a point per game in the KJHL and his Sting debut will be eagerly anticipated. He commented: “This is a very exciting opportunity and I wish to thank Ian Johnson – his hard work and belief in this team made it an easy choice for me. I look forward to getting to know my teammates, my new hockey home and the loyal fans of Sutton Sting.” Johnson also confirmed he is in negotiations with his final forward about a possible two-way contract with an EPL team.

Solway Sharks have signed forward Ross McIntosh from Dundee Stars. The former Scotland international played over 100 Elite League games for Dundee and Sharks Coach Martin Grubb was delighted to add McIntosh to his roster.”I’ve coached within the Scotland set-up and his work rate, attitude and ability have always impressed me,” said Grubb. “He’s a big guy who has good speed, size and will be expected to put up some numbers this season. I know Ross is desperate to contribute to the team and I’ve no doubt he will do well and fit into our system and dressing room very well. I’ve spoken to a few other coaches about Ross and they only have good things to say about him.”

Simon Leach has made his first signings as Whitley Warriors boss with Rob Wilson and Adam Reynolds rejoining the club, while Martin Crammond and Jamie Tinsley have agreed another year. “Warriors were a little short on numbers at the back last season and Rob brings a great deal of quality and experience to our blueline,” said Leach. “Adam is one of the top players in the league – a proven goalscorer who is a great addition to our line-up. Jamie has played at a higher level in the past and is great asset, while Martin’s versatility is invaluable to us.” Karl Culley is expected to rejoin Warriors after he announced his departure from Billingham Stars.